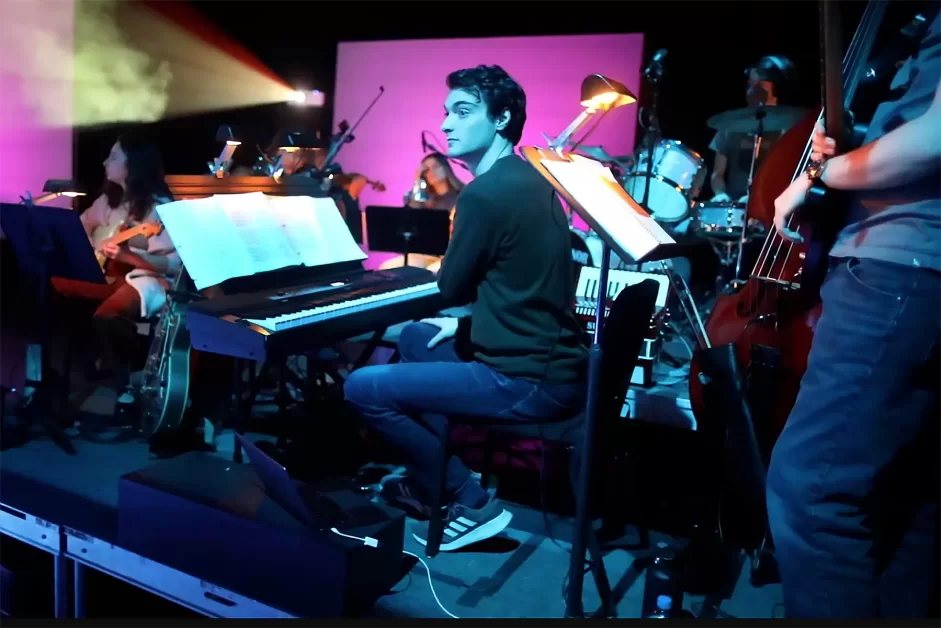 Video: Noah Pott ’22 and the romance between theater and music | News

For Noah Pott ’22, what started out as a fun way to kill time the summer before seventh grade – starring in a community production of the musical Olivier ! — culminated in a proud but terrifying moment on stage at the Schaeffer Theater on a recent March night.

The occasion was the first on March 3 of 35mm: A Musical Exhibition, which Pott directed as part of his senior thesis in theater and music. A one-man band of sorts, he not only conducted the show, but also led a live orchestra — Pott is also a music major — and played keyboard and accordion.

In the thrilling moments before the curtain was drawn, Pott recalls thinking, “It’s real, it’s night, it’s when we have an audience. There are real issues here.

“My heart was racing, that’s for sure.”

Then the magic of the theater took over. “I remember a time, maybe after the first or second song, when I started playing the piano on stage and conducting.”

Pott’s experience with 35mm exemplifies what he discovered while studying at Bates: a performance community that thrives on collaboration, which in turn opens doors to all kinds of storytelling possibilities that showcase a variety of skills.

The play features a series of vignettes in which actors perform songs in front of projected photographs by New York artist Matthew Murphy with music and lyrics by her husband, Ryan Scott Oliver.

The piece “examines how photographs inspire the stories told on stage,” says Pott. “It’s not often done in the musical theater canon by any means.”

35mm shows that there are “a myriad of possibilities” in how theater can tell stories, he says. It’s about “marrying theatre, marrying dance and movement and acting and all of these different aspects – and technological design and production – to tell these stories.”

As a director, Pott has found he thrives on the collision of ideas that arise when a production is envisioned and executed.

“One of my favorite parts is just listening,” he says, “listening to other people and hearing other people’s opinions. I really want to listen to others and collaborate on just about every aspect of production.

Pott describes the meeting of his two creative worlds, theater and music, as a kind of romance. This “new love,” as he calls it, began to blossom when he joined the Deansmen a capella group during his first year at Bates, moving into the role of Music Director his second year. He calls the work as creating “a balance between the voices in the group and also creating a collaborative atmosphere. I just loved it.

Complementing his two majors, Pott is pursuing a general education concentration in urban studies, and while studying abroad in Copenhagen, he took courses in urban studies and design.

What does urban studies have to do with performance?

Well, “cities and the performing arts are inextricably linked – where there are cities, there are people, and the arts are the lifeblood of people,” says Pott. “Whether I go into urban planning or design, or the performing arts beyond Bates, these two passions will naturally feed together, with the goal of creating a better, more sustainable and more humane world.”

What Pott will take away from Bates is the ability to achieve excellence “in many different things – and to continue to do all of those things after Bates as well. Whether it’s music, musical direction, environmental studies or all of the above.