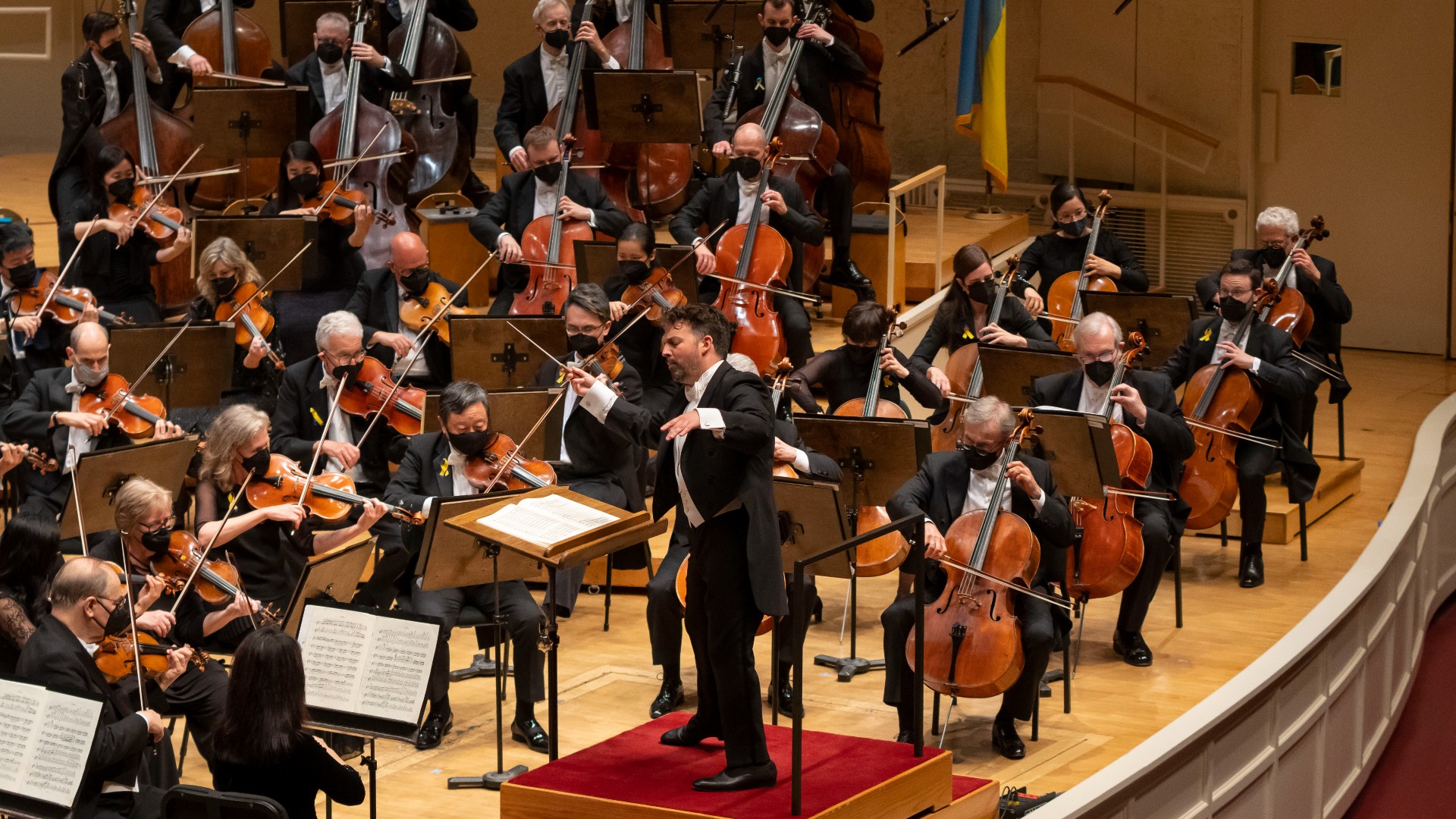 Although they were performed earlier this month and are now beyond their “attendance dates”, three recent concerts by the Chicago Symphony Orchestra – led by two different guest conductors and featuring featured two different guest violinists – are worth recounting. They were memorable for a wide variety of reasons.

On June 10, James Gaffigan – the wonderfully lively New York-born conductor with a wide array of orchestral and operatic credits who has just been appointed Music Director of the Komische Oper Berlin – led a five-hour program truly magical pieces with the Georgian-born violinist. Lisa Batiashvili as soloist in works by two late 19th century French composers, Camille Saint-Saëns and Ernest Chausson.

The concert opened with a lively performance by Saint-Saëns, aptly titled “Bacchanale”, the wonderfully seductive ballet segment of his opera, “Samson et Dalila”, which pays homage to Bacchus, the Greek god of wine and ritual madness. Alternately wild and rhapsodic, with castanets and cymbals complementing the sound of the full orchestra, which was in its usual stellar form, it ideally paced the rest of the evening.

Next comes Batiashvili (wearing an elegant tomato red dress), to play Chausson’s “Poème pour violon et orchester”, with its pensive and lyrical opening enhanced by its beautiful lilting tonality and the heartbreaking quality of the music which led to an explosion of increasingly intense passion. Saint-Saëns’ harmonious use of the solo violin was remarkable both in the work’s dramatically grandiose passages and in its quiet final moments.

And then it was back to Saint-Saëns, with the return of Batiashvili on stage for the composer’s “Introduction et Rondo capriccioso”. An opening passage associated the violinist with the soft plucking of the strings by the orchestra. And from there it was to a beautiful theme of remarkable yet delicate speed – full of powerful bowing, an energetic exclamation and an absolutely golden tone. A powerful explosion of timpani turned the mood around, with Batiashvili joining the full orchestra in conversation and moving into a fast finale. 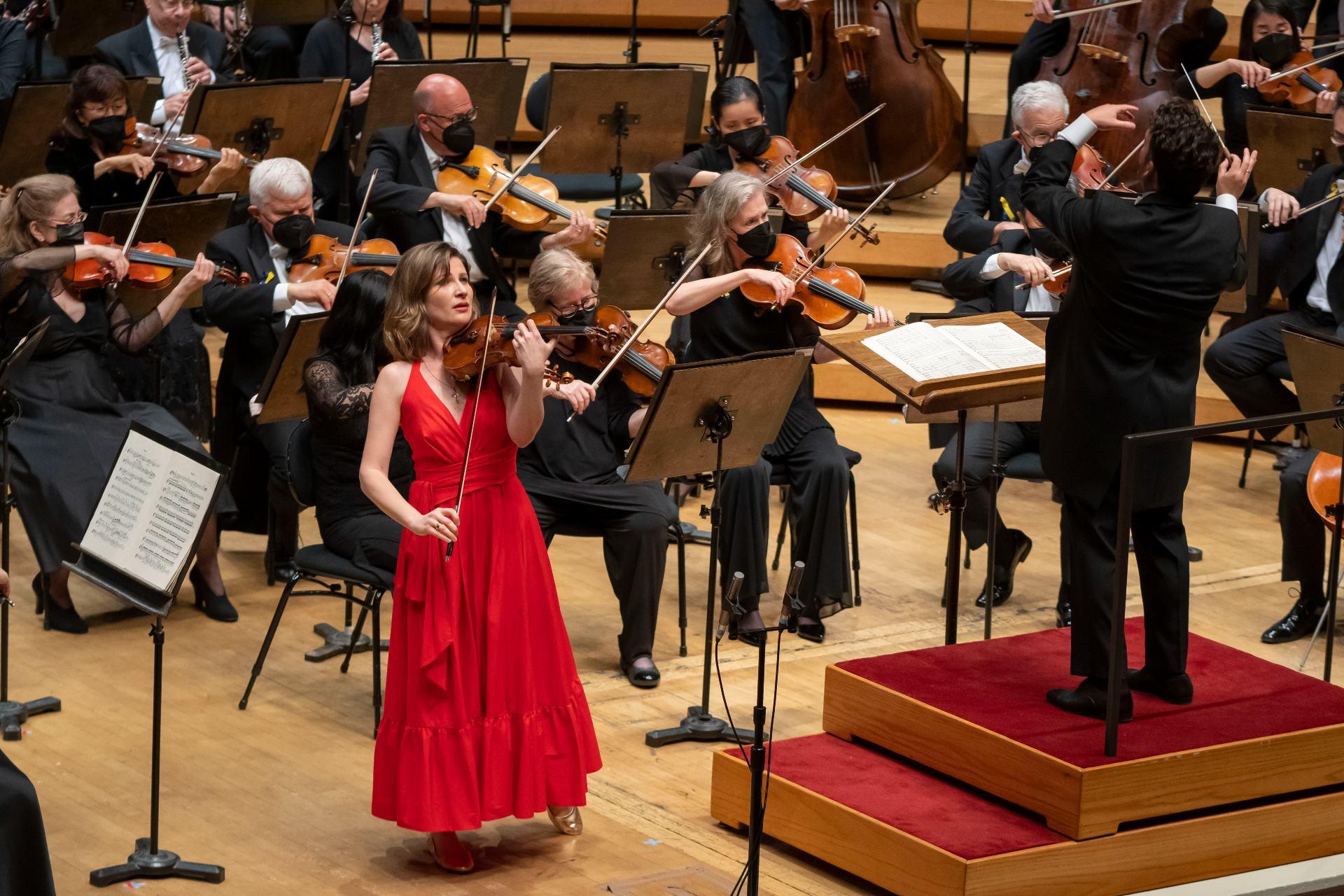 The second part of the concert begins with Mussorgsky’s “A Night on Bald Mountain”, brilliantly orchestrated by his friend Rimsky-Korsakov, who survived him. The work made extravagant use of the percussion section, from its wild opening with the clash of cymbals and hammering of timpani, to the stormy sound of what suggested savage cavalry led by Satan. Gaffigan (who moves like a dancer) fully captured the high theatricality of the work, as did the orchestra, with notable bugle calls from the brass, thrilling use of strings and winds, and then the soothing sound of the bells of the church, a dreamy dream. riff on the harp and a wonderful turn on the clarinet by John Bruce Yeh. From there it was on a dream ending.

The concert closed with Tchaikovsky’s largely familiar but still delightful “Romeo and Juliet (Fantastic Overture)”, which the composer had at one point planned to turn into an opera, although it never happened.

Although I confess that this evocation of Shakespeare’s play will never have the same impact as Prokofiev’s superb ballet score for history, there is still an undeniable beauty to be found in the 21-minute work of Tchaikovsky. It clings to its mournful opening, then transitions into a passage of high speed and fury, a beautiful romantic and dreamy theme, and a passage of tragic and thrilling intensity.

And now, a brief recap of two earlier concerts impeccably conducted by Esa-Pekka Salonen, the music director of the San Francisco Symphony Orchestra who also happens to be a gifted composer.

The first concert opened with ‘Entr’acte’, a brief but intriguing piece for string orchestra by Caroline Shaw, a Pulitzer Prize-winning composer whom I did not know at all. Full of shifting modulations – sometimes lyrical, sometimes spatial and at one point semi-silent, it was both quirky and intriguing, with notable pinching sequences by bassists and cellists, and ingenious use of the full potential of the strings. 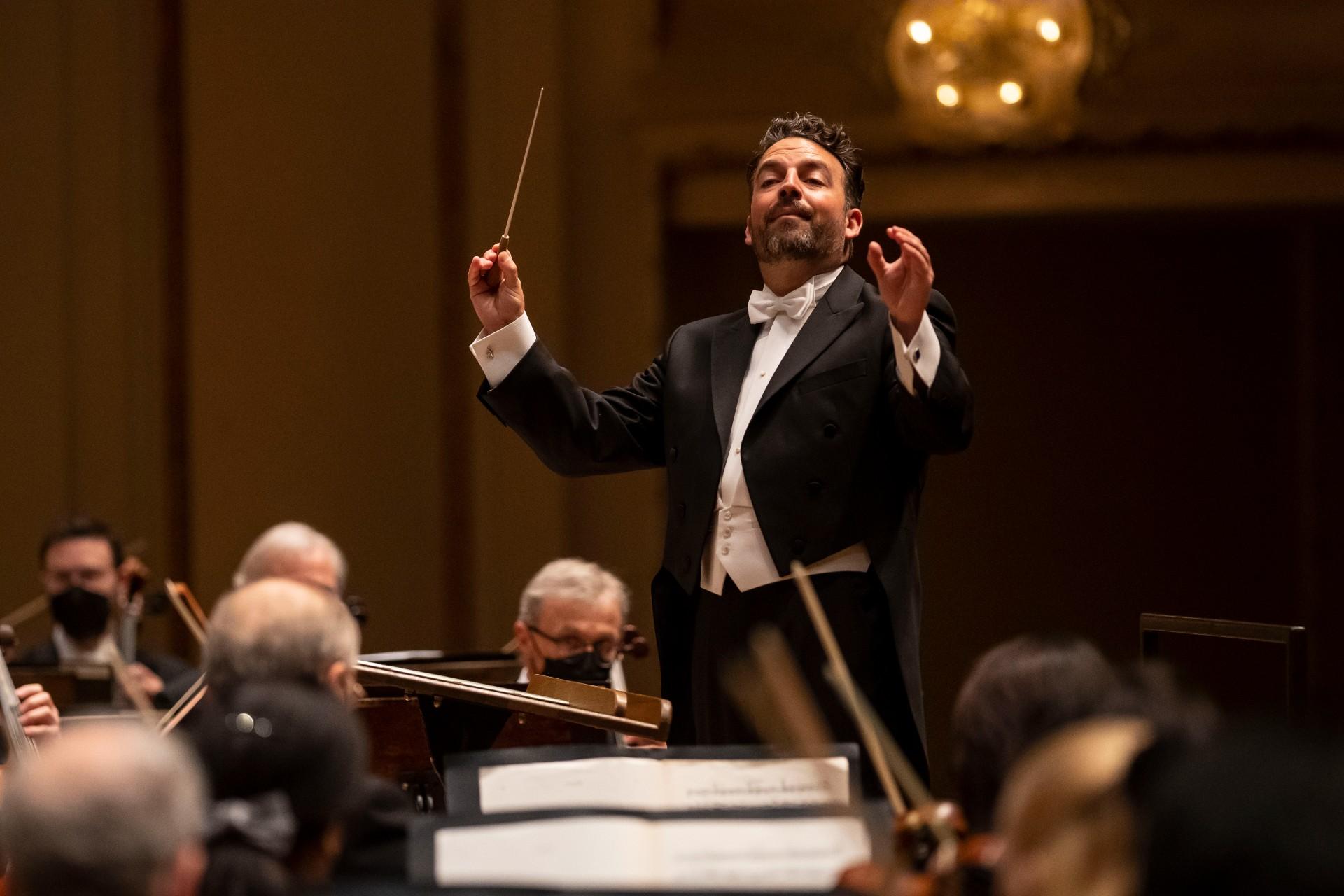 Then it’s off to “Gemini,” a stunning piece by Salonen from 2019. As he explained to the audience, the work – which features a large and varied percussion section – is meant to capture the myth of twins: Castor, the immortal son of Zeus, and Pollux, a mortal sired by a Spartan king, both born of Leda. (Remember, it’s a myth.) The first half of the piece captures Pollux, beginning with a mystical-impressionistic quality (with Cynthia Yeh on vibraphone) and the sound of flutes. Then, for Castor, the full orchestra creates a large sonic whirlwind with strings, horns and percussive sound effects. (I really want a second audition of this work.)

The second half of the program was devoted to Ravel’s sumptuous “Daphnis and Chloe, Choreographic Symphony in three parts” with the fully masked Chicago Symphony Choir and an extravagant use of percussion (drums, cymbals, castanets, crotales, tam-tam, glockenspiel, xylophone and wind machine), as well as two harps and a celesta. Created as a score for Diaghilev’s Ballets Russes, the work has a haunting cinematic quality with the choir adding a heavenly tune and the orchestra churning out a wild sonic hurricane. Pure sonic magic for 50 minutes, with Salonen in full control.

A week earlier, the conductor conducted another concert that began with an enchanting, fairy-tale rendition of Ravel’s “Mother Goose” and ended with Stravinsky’s “Symphony in Three Movements.”

In between was an obsessive new work by American classical and pop composer Bryce Dessner. His new ‘Violin Concerto’, featuring Finnish violinist Pekka Kuusisto’s incessant, repetitive and utterly obsessive bowing, which was backed by the equally relentless bowing of CSO violinists, also set the tone. a large percussion section at work. But most of the time, what was generated was a kind of rarely heard compulsive sound of violins in a classical music environment. And in the end, I could only think that Kuusisto had to travel with a suitcase full of violin strings and that he might have to completely rearm his instrument after each performance.

To note: Maestro Riccardo Muti, who returned to Chicago this week, was to conduct a program (Thursday through Saturday) featuring Beethoven’s “Violin Concerto” (with guest violinist Anne-Sophie) and “Symphony No. by Brahms. But Thursday morning he tested positive for COVID-10. His last-minute replacement is Lina Gonzalez-Granados, CSO’s apprentice conductor Sir Georg Solti.

Next week (23, 25 and 28 June) will take place the highly anticipated concert version of Verdi’s opera, “Un Ballo in maschera (A masked ball)” with Francesco Meli, Luca Salsi, Damiana Mizzi, Joyce El-Khoury and Yulia Matochkina and the Chicago Symphony Chorus. No word yet on Muti’s return. For tickets, visit cso.org or call (312) 294-3000.

On Monday, June 27 at 6:30 p.m., Muti is scheduled to perform a free concert at the Pritzker Pavilion in Millennium Park. The program will include Shostakovich’s “Festive Overture” and Tchaikovsky’s “Symphony No. 4”.