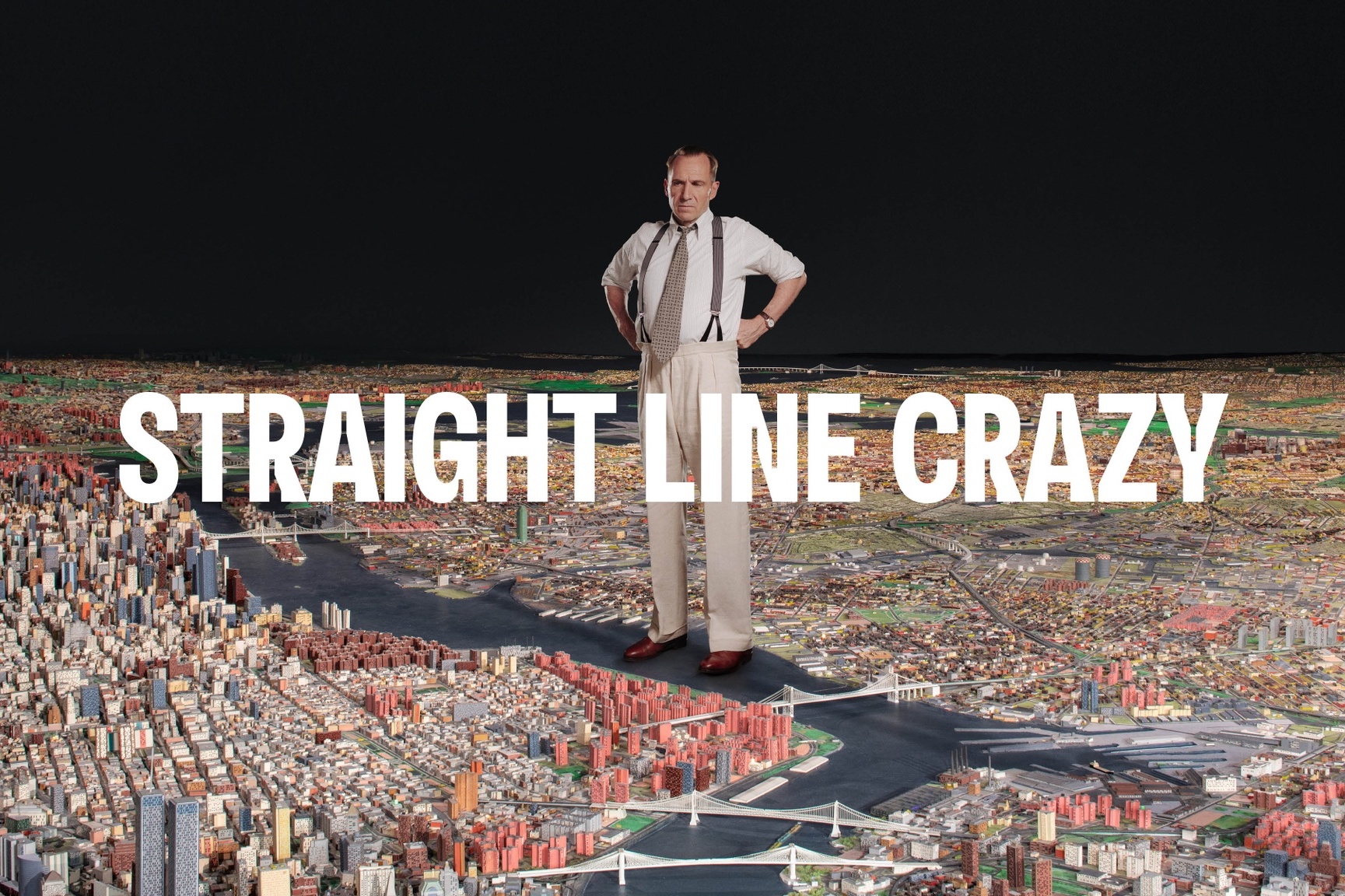 THEATER REVIEW: Who puts the public in public works? A review of “Straight Line Crazy”

“If you seek to share beauty, beauty is gone.” That’s the warning sounded by a horrified (and fictional) “Henry” Vanderbilt, in the opening scene of David Hare’s new play “Straight Line Crazy.” The former money’s replacement is in a tense meeting with legendary New York city planner Robert Moses, who is determined to open Long Island’s beaches to people other than the Vanderbilts, Whitneys and Fricks. “Okay, I got it,” we think. “Robert Moses, principled man of the people.”

Not so fast. It turns out that the population he has in mind for riverside recreation doesn’t need rapid transit and will make good use of his road network on his own. His people would drive their own cars to the beach, or not come at all. “Okay, so Robert Moses: racist and elitist asshole? “I left the theater 20 hours ago and I still have no idea.

Everything I knew about Moses before watching this British production was that he was the force behind the halving of the Bronx with the Cross Bronx Freeway and, therefore, the forced exile of many black and brown residents of that borough. I looked forward to better understanding one man’s motivations behind this and dozens of other projects in and out of town, including the West Side Freeway, Queens-Midtown Tunnel, Verrazano Narrows and Throgs Neck Bridges , Jones Beach State Park and Brooklyn Heights. But while Ralph Fiennes definitely spends 150 minutes playing a character other than Ralph Fiennes, he’s also not really Robert Moses either, both because the script doesn’t give him much meat to work with, and what it offers is not really based on what is known of the man, or at least can be safely inferred from his time and place.

Moïse was apparently well regarded until his reputation was clouded by the publication in 1974 of Robert Caro’s biography “The Power Broker“, which this piece is based on. The piece confuses him further. This led me to understand that he liked swimming, but he didn’t like nature, he hated a walk, but he liked the straight line, that he had a nice wife, but maybe he came home with other women, that he was an unusually difficult boss, but somehow inspired such loyalty that his two closest associates stayed with him for 30 years.

What motivated him, I wanted to know. What was the fuel in his tank? Was he greedy? Heartless? Misunderstood? Waiting for the bottleneck to get out of the theater, I overheard my neighbors trying to figure out some key details of Moses’ life that the play hadn’t clarified.

“So he was a racist?

“Yes, yes, he was, and I heard he was also an anti-Semite. Like, he was born a Jew, but denied it, and was actually an anti-Semite? I think?”

Jane Jacobs (played by Mary Stillwaggon Steward in the performance I saw) is the anti-urban renewal activist who describes Moses as “straight crazy,” but she doesn’t call him that to the face. We’re led to believe that their natural antagonism will fuel the journey, but the two have never met in real life, nor do they meet on stage. Other sources of engaging conflict aren’t going anywhere either. Vanderbilt is defeated from the start, and Mariah Heller, Moses’ fictional black assistant whose family was displaced by the Cross Bronx Freeway, doesn’t have enough history or a plausible enough storyline to make her a worthy adversary.

As it stands, Jacobs mostly appears front and center to deliver the kind of plot summary we’re used to seeing in an introductory snippet or two. The exception is a meeting Jacobs attends to protest a planned freeway through Washington Square Park, at which she gets the memorable line, “Moses looks at the West Village and sees a slum.” I look at the West Village and I see a neighborhood. I see life!”

This points to the most resonant – and relevant – theme of the show, namely “Who do I/you/we mean by ‘the people’?” The play itself, however, does not guide us to an answer. We are explicitly told that Moses disdained both aristocrats and slum dwellers, and that he also fought with the middle class. The most plausible explanation for Moses’ unhumane approach to the public works of the piece is that, for him, “the people” were a disembodied entity, as real as pieces on a chessboard. He is, as the play openly suggests, the natural ancestor of the modern real estate developer.

(Also the colonizer’s obsession with the straight line. Moses reminded me of the the bisection of New Guinea right in the middle by bickering colonial authorities. By creating Irian Jaya in Indonesia and the mainland of Papua New Guinea, they literally split tribes, villages and families in two. Moses’ insistence that “[t]People don’t know what they want until you give it to them,” takes on a different hue when you look at a map of the world and follow where all the straight lines are.)

Shortly after intermission, it becomes clear that Connell, played by Judith Roddy, is a stand-in for America’s ambitious 2022 conscience. That means she gets to state the obvious, as in “[t]here’s a bias in this office, and it’s a bias against the better-off,” and that generally sounds like the scolding in our collective head, and nothing at all like a flesh-and-blood woman of any era, let alone one born in the first decade of the 20th century. For example, she talks about her “mindset” of depression, a term that surely didn’t come into common usage until well after her time.

We have no idea what she gets out of working with Moses, whether she really likes him, or why she only dumps him at the end, rather than when it becomes clear that not only does he have l plan to put three horizontal freeways through Manhattan. , he also conceals this information from anyone outside his office.

I hope “The Power Broker” makes sense of the unreal character on stage, one moment flamboyantly pompous, the next soft, rejecting women, then in the next moment employing his employees’ tightly-tuned listening skills with his employees. a sensitive yogi. (“Is this your point of view?” he asks them repeatedly.) From what my mother described to me of the crass and misogynistic culture of the New York offices of the Mad Men era , it would be a laughable understatement to say that Robert Moses as depicted in this play would not belong there. As for racism, the only direct evidence of it is an abrupt dismissal of “that woman of color.” But the woman in question is this Heller employee, with whom he has just had a respectful, even deferential interview. Go on. Evasive history is not what our moment calls for. We are big kids. Give it to us directly. Don’t graft 2022 sensibilities onto 1950s people. Emily Dickinson said, “Tell the whole truth but tell it obliquely.” We depend on artists to show us truth in a new light, not history with new facts.

The show takes on a particularly preachy tone towards the end. You haven’t heard awkward laughter until you’ve heard the orchestra’s reaction to Jane Jacobs’ history lesson on “cleansing” the poor in the West Village. Fiennes, for his part, as his star is clearly fading, stares at the right section of the audience and promises, “Fashion will always come back.” In effect. The Shed Theater itself, located in Hudson Yards, is not the kind of place built for the masses and not easily accessible by public transportation.

I look forward to the day when Broadway and Hollywood get tired of re-arranging the past to make it more palatable but far less interesting. How about someone undertake a serious study of the life of, say, Oseola McCarty, the laundress who donated her life savings to the University of Southern Mississippi? You know, one of the “people” we always hear about, but never see.

“Straight Line Crazy” plays at The Shed (in the Bloomberg Building on 30th Street, off 9th Avenue) until December 18. Tickets are sold out, but if, like me, you put your name on the waiting list, you could grab a spot when additional places become available. And if your seat looks like my $99 seat, it’ll be located in the far corner of the action, facing the stage right with a partially obstructed view, so you’ll get pretty familiar with the outlines of Ralph Fiennes’s neck and Judith Roddy’s shoulders. (I’ve never sat so close backstage at a play that I could both hear the chatter of actors and stagehands and smell their weed smoke.) If you’re crazy enough to buy resale tickets on StubHub, these will cost you somewhere between $400 and $3,000.