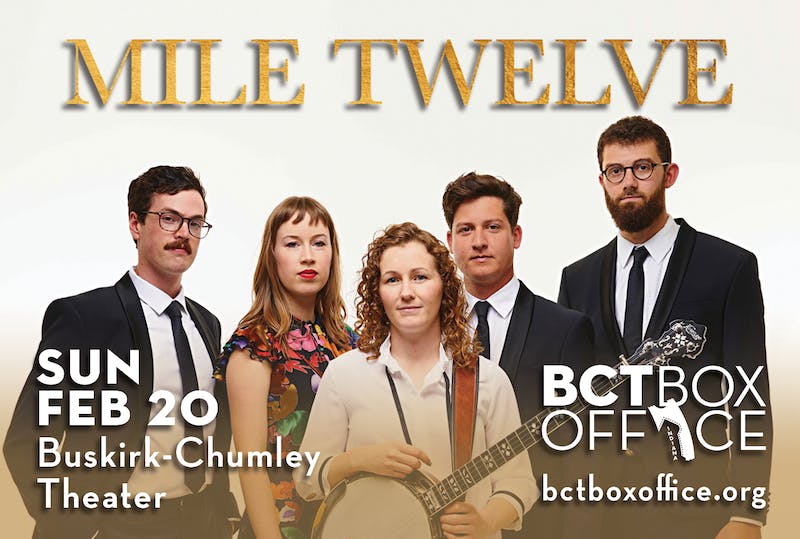 String band Mile Twelve will perform at the Buskirk-Chumley Theater

Mile Twelve, a string orchestra, will perform at the Buskirk-Chumley Theater at 8 p.m. Sunday. Doors will open at 7 p.m. Ground floor and balcony tickets are $25 and orchestra pit tickets are $35 on site website.

The band hails from Boston, but according to their website, each of the five members hailed from a different area. Evan Murphy, guitarist, is from Milton, Massachusetts. Catherine Bowness, banjo player, was born in Marton, New Zealand. Nate Sabat, bassist, is from New York. Ella Jordan, violinist, grew up in central Texas. Korey Brodsky is from Connecticut.

Each member brings influences from their different fields, which has resulted in contemporary and relevant music, according to the theater’s website.

According to the Buskirk-Chumley Theater website, the title of the band’s latest album, “City on a Hill,” alludes to the historic imagery phrase from Boston, where the band was originally formed. Murphy said the band recorded the album as authentically as possible. For him, that included the use of no metronome and no filler material.

The group’s website stated that the theme of their latest album is people facing challenges and overcoming them.

Mile Twelve has toured North America, Ireland, Australia, New Zealand and Japan. They won an IBMA Momentum Award in the group category from the International Bluegrass Music Association in 2017 and IBMA’s New Artists of the Year award in 2020.

The Buskirk-Chumley Theater requires proof of COVID-19 vaccination or a negative COVID-19 test to enter.