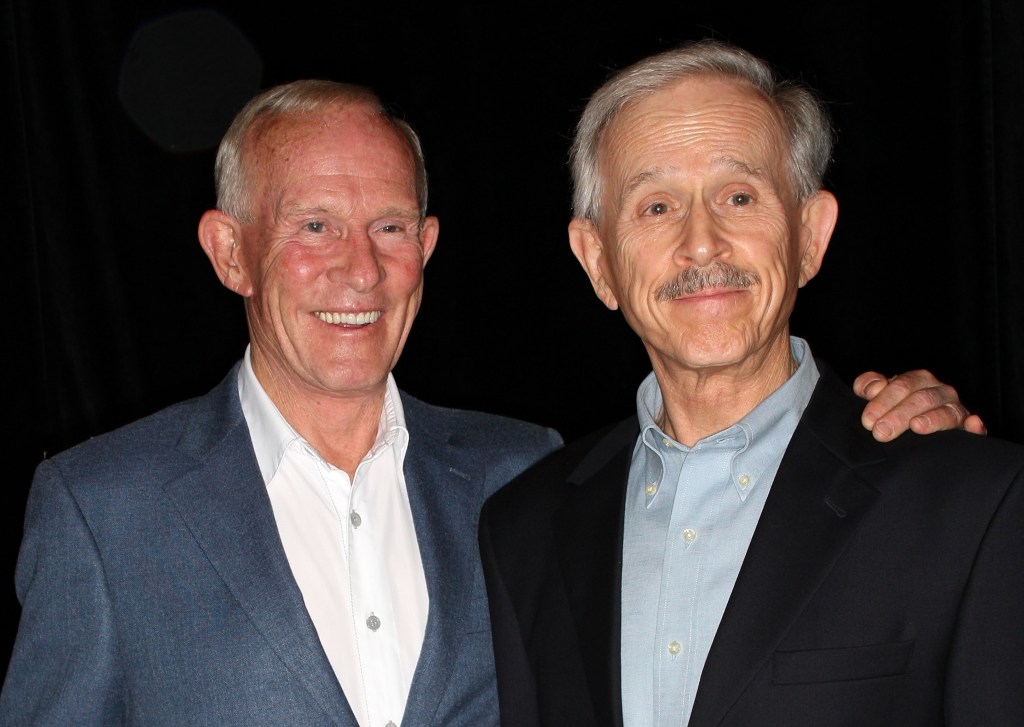 Smothers Brothers at the Bankhead Theater in Livermore

Tickets for all shows in the 2021-2022 Bankhead Presents season are available online, by calling 925-373-6800, or at box office counters. For a full list of events, visit livermorearts.org.

The public is invited to celebrate Moraga Art Gallery’s new spring show, ‘Natural Abundance’ at a free event from 5-7pm on April 23. The exhibition features floral and scenic oil paintings by member artist Jill Landau and a collection of works by Bay Area printmaker Donna Brown, whose artistry captures joyful moments, such as when colorful birds gather on the tree in front of his window.

Also on display are paintings, jewelry, ceramics, sculpture, glassware, prints, woodwork, photography, monotypes and more by the gallery’s core group of 18 artists. The reception will include wine, light snacks, a meet and greet with the artists, live music and the opportunity to mingle with other art lovers. Open from noon to 5 p.m. Wednesday through Sunday, the gallery is located at 432 Center St. in the Rheem Mall of Moraga. For more information, visit moragaartgallery.com or call 925-376-5407.

Although the concert is free, the theater management asks spectators to choose their seats and print their tickets in advance. For tickets or more details, go online to elcampaniltheatre.com.

“Consider Yourself” Home With Pittsburgh Community Theater as the cast returns to El Campanil Theater in Antioch with the ever-popular family musical “Oliver!” The performances will take place from April 30 to May 8.

Based on the Charles Dickens novel “Oliver Twist”, “Oliver!” is a classic of musical theatre.

With drama and humor, the story takes us through the journey of an orphan boy, Oliver (Nathen Penner), who runs away from an abusive workhouse only to run into a gang of young pickpockets led by the manipulator Fagin (Gregory Brown). The well-known score includes songs such as “Consider Yourself”, “Where Is Love?”, “As Long as He Needs Me”, and “Food, Glorious Food”.

The county orchestra will perform a Beethoven concert on April 23

Because COVID-19 closures prevented the Contra Costa Chamber Orchestra from celebrating Beethoven’s 250th birthday in late 2020, the orchestra is calling its April 23 all-Beethoven program “Beethoven’s Beated Birthday Bash,” which kicks off at 2 p.m. hours in the historic El Campanil theater on Antioch’s waterfront

This immersive live experience begins with Beethoven’s ‘Fidelio Overture’, the glorious curtain-opener to the only opera he ever wrote. Legendary composer and bandleader Leonard Bernstein said “Fidelio” was “one of the most glorious pieces of music ever devised by a mortal…”.

Afterwards, participants will appreciate “Beethoven’s Symphony No. 8 in F major”, a light and mischievous composition sprinkled with subtle musical jokes. The unconventional form and comic tone of this symphony set it apart from other Beethoven symphonies.

Finally, the orchestra will offer the exuberant “Piano Concerto No. 4 in G major”, created in 1808 in Vienna and featuring Oakland piano soloist Amy Zanrosso, who fell in love with music on a small electric organ and started piano lessons at age 6. At 15, she decided to devote her life to music. Since then, she has traveled the world developing her craft and performing in an astounding variety of settings, including appearances with Grammy-winning artists.

Affordable tickets are available on the El Campanil website above or at the theater. For more information about the orchestra, visit ContraCostaChamberOrchestra.org.

The theater will premiere the acclaimed Dutch film “The Judgement”

The International Film Showcase (IFC) brings the U.S. premiere of “The Judgment” from the Netherlands this month to theaters across the region.

The film has won numerous awards and is based on true events from a controversial Deventer murder case. In the film, a Dutch television journalist finds himself defying the police, courts and media as he tries to uncover the truth.

The film opens Friday at the Orinda Theater for at least a week and April 23 at Napa’s Jarvis Conservatory. For more information, including tickets, visit at internationalshowcase.org online, and see a trailer for the film at youtube.be/qraSBsmEK10.

Los Medanos College will perform its 27th Gospel Celebration, a virtual event at 7 p.m. on May 7, from the LMC Choral Vocal Hall.

This concert will feature Broadway legend and “Aladdin” and “Hamilton” actor James Monroe Iglehart as a special voice artist. Iglehart is perhaps best known for his Tony Award-winning performance as the Genie in the original Broadway production of “Aladdin.” He took on the role of Marquis de Lafayette/Thomas Jefferson in the Broadway version of “Hamilton” in April 2017 and can be heard as super-producer Steve Jones in “As The Curtain Rises,” the first original Broadway soap opera. .

This event will also feature renowned scholar and academic researcher Dr. Monique Charles, from Britain’s University of West London. Charles will discuss how “Gospel Music & Grime” (London’s version of American hip hop) can be used as an academic learning pathway for all students of color.

The theme for the concert is “Gospel & Grime Music: Creative Unifiers that Support Students of Color”. Log in to the free online event with the password “music” on 4cd.zoom.us/j/8809099244.

Submit articles from the On Tap area to Judith Prieve at jprieve@bayareanewsgroup.com.