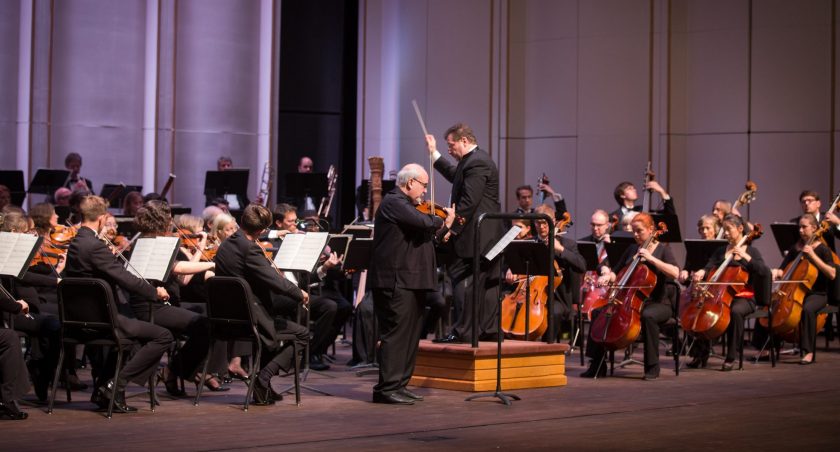 The Schenectady Symphony Orchestra (SSO) is set to join Proctors Collaborative starting August 1. SSO will retain its board of directors and Glen Cortese will remain its artistic director. Supervisors will provide administrative services such as marketing and accounting.

“Proctors and the Schenectady Symphony have a long history in the community and with each other,” said Philip Morris, CEO of Proctors Collaborative. “This management plan aims to turn that history into a long-term relationship for the health of the arts in our community.”

Over the past decade, Proctors has struck similar deals with other local arts organizations, like Universal Preservation Hall in Saratoga Springs and Capital Repertory Theater in Albany.

SSO has a long-standing partnership with Proctors.

“We’ve been a resident of Proctors since 1979 and they’ve been handling ticketing and other functions for us for seven or eight years,” said Robert Bour, Chairman of the Board of SSO.

The deal with Proctors was partly due to financial constraints and the separation of SSO and its part-time executive director in October 2021.

“At that point we had to decide if we were going to try to replace that person and the discussions were about where are we going to find someone who will work part-time for what we can afford to pay. and who can do all these things?” said Bour.

Partnering with overseers, rather than replacing the SSO Executive Director, made sense for SSO’s volunteer-run Board of Directors.

SSO’s staff is small and includes three part-time employees: Cortese, a staff manager and a music librarian. Its operating budget is approximately $175,000.

The management agreement with Proctors Collaborative will relieve SSO of most of its administrative duties, giving SSO access to Proctors staff, including its marketing and promotions team and a donor relations staff member. SSO will retain control over the music it presents.

“We are really excited about moving forward. By getting away from all those administrative tasks, we’re going to focus on what we do best and that’s music,” Bour said. “Plus, being part of the collaboration gives us greater reach in a lot of things that we just could never try to accomplish on our own.”

Founded in 1934, the core orchestra comprises 65 musicians who are all drawn from the local community and include professional and non-professional musicians. SSO often hosts concerts at the Proctors and Universal Preservation Hall, among other regional venues.

Since announcing the partnership, Bour said, “Everyone seems to think it makes sense. When I look at other small orchestras across the country, many of them are partnered with various other organizations because they have to be.

Cortese will begin his fourth season with the Schenectady Symphony Orchestra in October with “A Musical Time Machine.”

“This season’s program is designed to transport you back in time and focus on specific musical eras,” Cortese said. “We will present new works, traditional favorites [and] rarely heard works as well as new ways to listen to familiar favorites.

SSO’s next concert, “A Night at the Movies”, is scheduled for Saturday, August 13 as part of the Music Haven Concert Series at Central Park in Schenectady. Visit schenectadysymphony.com for more information.

More from The Daily Gazette:

Honeytree will perform at the outdoor theater | The star