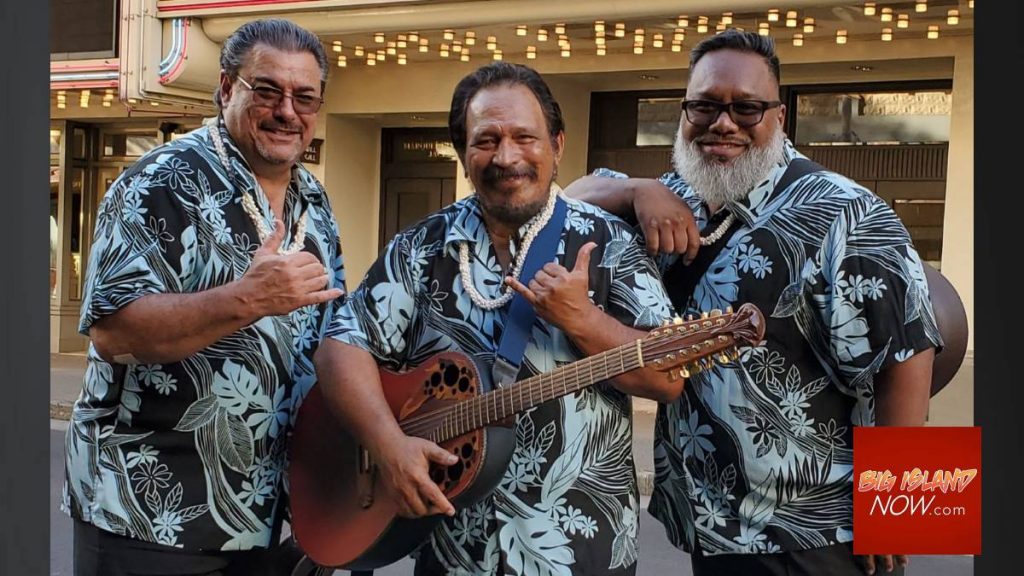 Return of the Mākaha Sons to the Hilo Palace Theater

It’s been over two years since the Hilo Palace Theater last hosted a live concert, but that changes this weekend with the return of an iconic act.

The Mākaha Sons will once again adorn the historic Palace stage on Saturday, April 30. The concert will begin at 7 p.m. and will feature new songs and old favorites, including “Take a Walk in the Country.” Ticket prices are $35 for general admission or $45 for priority orchestra seats in advance. The cost of all tickets increases by $5 if purchased on the day of the concert.

Hilo Palace Theater executive director Phillips Payson told Big Island Now in an email that this will be the first full-capacity live concert at the Palace since the COVID-19 pandemic shut everything down in 2020. All restrictions have been lifted and concessions including beer and wine will also be available at the Palace Grounds Café.

Payson said the theater was thrilled to welcome live music back to its stage – and a full audience.

“It’s a surreal feeling to welcome people into space,” he said. “There’s elemental satisfaction among a cheering audience, and we’re excited to be heading into a jam-packed summer with a diverse lineup of exciting events.”

Payson added that it’s an honor that such an iconic group is the first to return to the theater stage.

“We are thrilled to have the Mākaha Sons back on our stage,” he said in a press release announcing the concert.

Prior to the pandemic, the Palace hosted The Mākaha Sons for an annual Valentine’s Day concert. The trio played the last live concert at the theater before closing in 2020 and COVID restrictions went into effect.

“It is an honor to welcome them back to the Palace as the first band to usher in the return of live concerts to the historic theater,” Payson said in the statement. “Welcoming the iconic harmonies and joyful banter of the Mākaha Sons on the Palace stage is an absolute treat.”

With 22 albums, 23 Nā Hōkū Hanohano Awards, a Lifetime Achievement Award in 2010, and a book of over 150 songs, The Mākaha Sons have more than earned a place in people’s hearts. And Saturday viewers will not only be able to enjoy the band’s tunes — which many fans know just by hearing them — but they’ll also have a cool place to listen to them.

“After more than 10 years of active fundraising and development, the Palace Theater finally has air conditioning, which will be turned on for the concert,” Payson said in her email. “The Mākaha Sons have been very supportive of the project by having proceeds from many of their past shows go to the Theater Comfort campaign.”

It is sure to be an evening of good music and fun.

“Hi, Hillo. We are so happy to be returning to the Hilo Palace Theater,” band member Uncle Jerome Koko said in a special video message from The Sons on the Palace YouTube channel. “Go over there and get your guys tickets before it’s all sold out.”

Tickets for Saturday’s concert can be purchased in advance by clicking on here or in person at the Palais box office or by phone at 808-934-7010 from 10 a.m. to 3 p.m. until Friday. They will also be available on the day of the show if it is not full.

The Maryland Symphony Orchestra presents “The Firebird” at the Maryland Theater