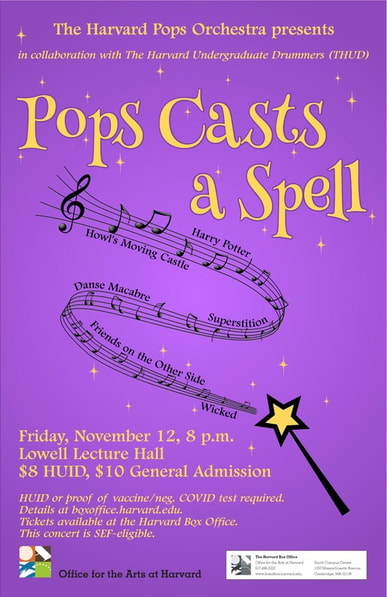 On November 12, the Harvard Pops Orchestra performed â€œPops Casts a Spell,â€ a theatrical rendition of an original magical plot in collaboration with The Harvard Undergraduate Drummers (THUD) in the Lowell Lecture Hall. Contributing to the theme, the venue was bathed in a mystical purple light and some of the musicians could be spotted with twists on traditional orchestral attire: a witch hat, a Gryffindor stamped robe and a pink feather boa, for to name a few.

â€œI like to think about what we do in a broad sense, presenting entertainment theatrical nights. We play music at a very high standard, but we also incorporate a fun, comedic story throughout, â€said Allen G. Feinstein ’86, Music Director of Pops. â€œOne of the reasons I love working with this group is that we have that extra creative side. “

The concert’s repertoire was as much a fusion as the presentation style, juggling funk rock, Disney soundtracks, theater and jazz. â€œWe center every show around a theme, and this year’s theme is magical, so we play tracks like Howl’s Moving Castle, Danse Macabre, songs from Harry Potter and Superstition,â€ said Georgiy A. Kent ’22 , one of the co-chairs of Harvard Pops. Some of their past themes have included time travel, funk and the British murder mystery – around which the ensemble has built their repertoire and even a silent film to accompany the show. â€œEvery show – and that’s why we call it a show instead of a concert – comes with a plot, written entirely by the members of the orchestra and performed by guest actors,â€ Kent said.

“Pops casts a spell” centers on its own storyline: Lily and Larry are two wizards recently graduated from Hogvard (a Hogwarts and Harvard coat rack), who embark on a magical mission in an effort to thwart the evil plans of a dark wizard. Along the way, the wizards face a “Wicked” pandemic, navigate “A Whole New World” to find “Howl’s Moving Castle” and enter “Double Trouble”, amid other episodes which are each represented by a piece of music.

The first act begins with the monologue of the wicked wizard Bartholomew, played by Jacob K. Ostfeld ’23, accompanied by comic extracts from the magic violin, performed by Skye G. Park ’24. At the start of the main characters’ journey, a magical pandemic gets in their way, which the orchestra captures in a classic memento mori, “Danse Macabre” by Camille Saint-SaÃ«ns. The shattering sounds of the Legno Pass and the blood-red light of the stage contrast with the comedy introduced by the two student wizards, Lily and Larry, played by Chloe A. Saracco ’22 and Benjamin AK Topa ’22. Their conversation includes clever Harvard-related spinoffs, redefining LS1A as a lizard summon and CS50 as computer spells.

After several adventurous turns, the wizards reach “Howl’s Moving Castle” and the orchestra begins to play a symphonic variation of “Merry-Go-Round” by Joe Hisaishi.

Soloist Rachel Guo ’22, former president of Harvard Pops, was delighted to perform in person. â€œThere’s just something magical – like the theme of our concert – about playing together and everyone feeling that energy in the room. I can’t express it in words, but it’s an unforgettable feeling that I will carry with myself even after I graduate.

Act One ends with another piece with a virtuoso solo: “Fiddler On The Roof” arranged by John Williams, with Skye G. Park ’24 on violin. â€œIt’s not a routine medley; when people think of a medley for music from a Broadway show, they just think it’s a series of melodies, â€Feinstein said. “But this medley is very different because it’s both a medley and a kind of violin concerto.”

Act Two highlights a guest performance by THUD (The Harvard Undergraduate Drummers), which exists as the army of The Horrendously Underrated Demons in the pop realm. Using buckets and metal chair legs, the set depicts a cohort of brooding demons that the evil wizard summons. The concert ends with a jazzed-up version of Walter Murphy’s Beethoven’s Fifth, playfully repeating the iconic motif as the two student wizards triumph over the dark wizard.

Although “Pops Casts a Spell” was the band’s first live performance in nearly two years, Harvard Pops has remained busy during the pandemic. â€œWith those interested, we met every week and worked on creative virtual projects. We’ve done quite a few, actually, â€Feinstein said. From creating an original melodrama podcast to filming a funky take on classical music, Harvard Pops has remained active by creating a series of “pandemic projects” over the past year.

Still, in-person concerts are irreplaceable, especially for an ensemble like Pops who often interact with audiences. According to the director, Harvard Pops is focused on creating an audience-friendly, immersive experience, and last Friday’s room was the perfect place to do it. â€œWe perform in the Lowell Lecture Hall, which is very intimate – we are never more than a few feet from the audience,â€ said Feinstein. “It’s almost like a cabaret as opposed to a big concert hall. The informality of it is something we take advantage of.”

â€œPops really acts as a break from your busy schedule to just come over and play some fun music,â€ said Kent, looking back on his last four years as a member of Pops. â€œIt all comes together, and you sit there and think that all of the work you’ve put in this semester has come right now. And you’re like, ‘Oh, okay, that’s why I’m doing this.’ “

Soprano Laquita Mitchell to perform with the Princeton Symphony Orchestra at Holiday POPS! Concert on December 14