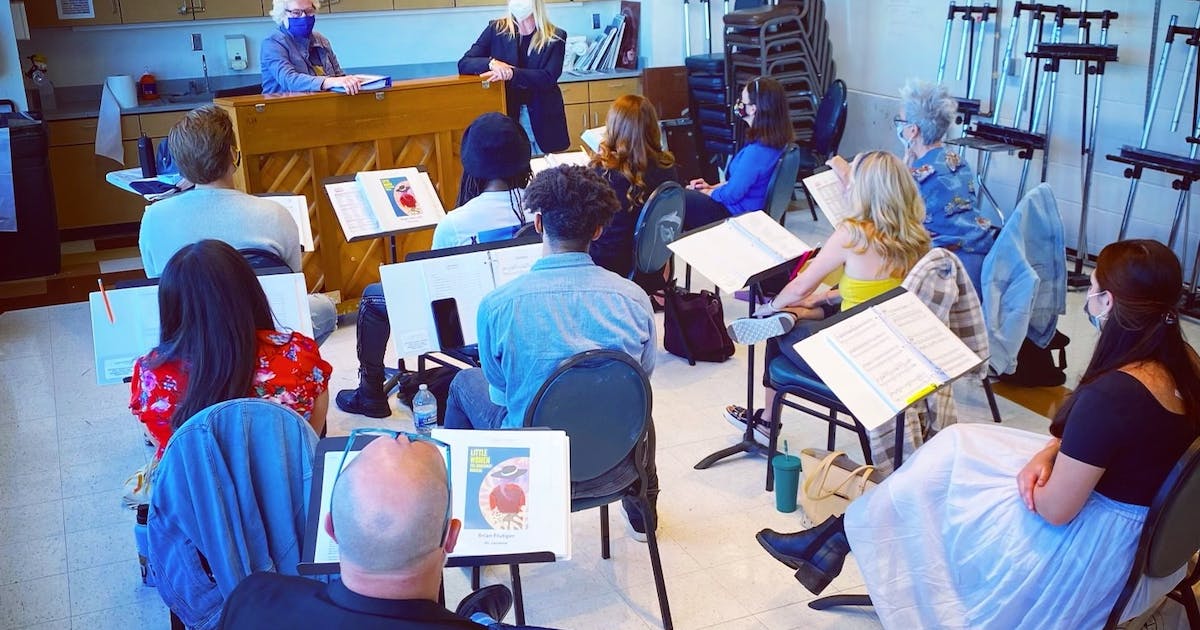 “Can we not use the word ‘retirement?'” suggested musical director Anita Ruth.

Fair enough. Ruth ‘steps away’ after 17 years at Artistry, where she will lead “Shreek” until August 14.

Ruth says goodbye to the routine of rehearsals, but if you do “Fun Home”, “Assassins” or “West Side Story”, she will speak. After five decades as a musical director – starting with the Chanhassen Dinner Theaters in the early 70s, when female directors were scarce – she’s ready to do something else.

“After ‘Shrek,’ we immediately get in the trailer and go to Michigan’s Upper Peninsula,” said Ruth, 76, who grew up in Crystal. She will be joined by his wife, Joan Griffith, a teacher and multi-instrumentalist who is usually part of Ruth’s bands, and dogs Jack and Rosie. There is also a trip to Antarctica this winter.

It sounds like “resigning” but, otherwise, relaxation is not on Ruth’s menu. She co-wrote two musicals. She and Melissa Hart want to produce shows that are rarely staged in homes. She and Griffith will resume the concerts they performed from their south Minneapolis porch, with talented pals. There is a podcast collaboration and literacy/educational projects with friend T. Mychael Rambo.

It’s the kind of business that accrues when you’ve been craving musical theater since an early ’60s family trip to New York City that included “The Sound of Music” on Broadway.

“They deployed Mary Martin on this rock and that was it for me,” Ruth said, in her flower garden near Bde Maka Ska.

In fact, her musical career started earlier, when she was 10 years old. (The following conversation has been edited for clarity.)

Q: Are you from a family of musicians?
A: My parents sent me to my grandmother’s in the summer to take piano lessons every day. I was afraid of her, of course. She was really that old school – if you can make them cry, then you did a great job. But I never had the ambition to be [a concert pianist, like her grandmother]. Now I am extremely grateful to have learned to play. Instead of listening to bedtime stories, I should recite the chords and all the different inversions.

Q: You started acting as a teenager, with community theaters and revues like First Nighters?
A: I happened to be in just the right place at the right time and luckily I had people say to me, “Can you do that? And I would say “OK”. I heard the Bloomington Civic Theater [now called Artistry] needed a piano player because theirs hurt his back. [Director] John Command was there and also in the First Nighters.

Q: Were you there a few years before the creation of the Chanhassen Dinner Theaters in 1968?
A: Gary Gisselman in Bloomington was chosen to be Chanhassen’s artistic director and we were all like, “Take me, take me.” A lot of people from Bloomington went there.

Q: Is that where you went from pianist to musical director?
A: The same year my mom died, my best friend Carolee Fariday died, in 1972. So we did a performance at Chanhassen for the Cancer Society in her honor and it was amazing. I did the orchestrations, which I hadn’t done before, and we had a big band and we were making a lot of money. Right after that, Gary said, “Could you make Chanhassen’s band sound like that?” And I said, “Sure.” So I was the musical director.

Q: Did the all-male group resist a female leader?
A: There was no pushback. It was completely collaborative. In the pit, unless the musical director simply cannot, the musicians know that their job is to interpret what is in front of them and follow the director.

Q: You said “A Little Night Music” was a Chanhassen landmark. Did you participate indirectly in its world premiere in 1973?
A: Len Cariou has done tons and tons of shows at the Guthrie [starting in 1966]. I was his pianist. Jon Cranney, who I was living with at the time, was a production manager at the Guthrie, so I knew Len. He auditioned for “A Little Night Music” in New York, so he was going back and forth before he got that gig. The first time he came back, he brought “Now”, his part of the Trio “Now/Later/Soon”, and it was by Stephen Sondheim! He said, “Help me with that?” I said “okay”. [Cariou would earn a Tony nomination.]

Q: You and Chanhassen separated in 1988?
A: Twenty years is enough. But it was a great job. You could live in the city and have a nice house and a nice life.

Q: You’ve freelanced everywhere, including Ruby’s Cabaret, Ballet of the Dolls, Children’s Theater Company, VocalEssence and overseas projects. What brought you back to Bloomington in 2005?
A: John Command said, “We do ‘Follies’,” and I said, “Where do I sign?” Thank goodness for John Command, and I’d like you to put him in the paper. They hardly paid anything. It was a community orchestra. But they had a lot of musicians and there’s something about being able to do the full orchestrations that, say, Leonard Bernstein wrote for “On the Town.” [At Chanhassen, Ruth re-orchestrated scores for eight to 10 players.] For “A Little Night Music”, I had 22 musicians. Three French horns!

Q: Have you worked with the Chanhassen musicians again, some of whom have returned for this latest Artistry show?
A: Yeah. The [13-person] the band I have for “Shrek” is almost entirely first call [ie., top-notch] musicians and they work for less than half of what they would get at Chanhassen or the Children’s Theatre. But they want to be there because you can do all the orchestrations.

Q: What are you going to miss?
A: My orchestra. The Chan group – we were really close then and a lot of us still are. And in Bloomington, we formed a very close-knit family. Go out and express yourself together? It means a lot.

Q: And will it do it again?
A: Joan and I have been playing music together every day of the pandemic. I learned so much from her. And I can do what I always wanted to do. So I practice a lot of gratitude.

Who: By David Lindsay-Abaire and Jeanine Tesori. Directed by Angela Timberman.