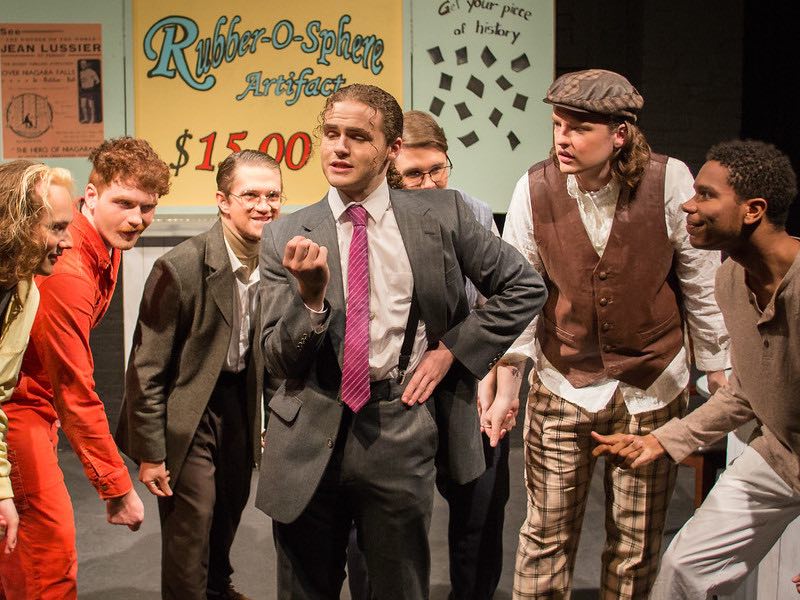 ‘Niagara: The Musical’, a work in progress with fabulous music

History has dubbed them the daredevils of Niagara Falls: the infamous risk-takers who thought it would be a good idea to float over the falls and fall 167 feet in crushing waves. It all started in 1901 with Annie Edison Taylor, who at age 63 dove into a barrel and lived to tell the tale. Since then, dozens of men – presumably not happy to be outdone by a woman – have attempted the same stunt, in different containers and with varying results, including gruesome death.

Thomas Folderauer and Jacob Oswald, two 2018 graduates of Westminister High School in Maryland, cleverly developed Folderauer’s idea to adapt the stories of 13 of these possibly deranged daredevils into a musical. Hey, if Stephen Sondheim could turn 10 malcontents who tried to kill the president into tuner, why not? Moreover, much like the criminals of killers, the Daredevils of Niagara Falls are mesmerizing (for a quick look at their renowned recklessness, check out the video below).

With music and lyrics by Folderauer and Oswald’s book, Niagara: The Musical debuted in an outdoor studio production last summer (a video which is on YouTube), and Golden Iris Theater brought the show to town for a world premiere at the DC Arts Center black box in Adams Morgan.

The first thing to say about niagara is that the music composed by Foldrauer is fabulous. I liked it. When the ensemble sings its harmonies like a choir, the effect is glorious. The rich pre-recorded accompaniment (orchestrations by Folderauer and arrangements by Kyle Munro, who also conducts) sounds incredible in the small DCAC space. I could have confused it with live (the sound design expert is from Folderauer). And the array of instruments involved – I’ve heard piano, percussion, banjo, guitar, clarinet, etc. – was electronically created by Folderauer as musical director, which could have been credited as an entire solo orchestra.

While the framing device of killers is a carnivalesque shooting range where killer characters gather in a location outside of their historical timeline, niagara takes place with spirit in a diving bar. It’s called the Bridge Street Tavern, based on a real restaurant once owned by Bobby Leach, who was the second daredevil after Annie Edison Taylor (“the original badass”, played by Debbie Mobley). Leach appears as a bartender played by Jacob Miller (whose resonant baritone stands out among the voices of the cast). And at that watering hole, Jesse Sharp (Roman Adolfs), a daredevil himself, summons the Falls Affinity Group so their stories can be told in a two-act one-by-one musical number.

One of the most poignant is that of Charles Stephens (Willem Rogers), who expected fame and fortune to come from his plunge and save his 11 children from poverty. Instead, he perished, and all that was left of him was a severed arm, tattooed with a message to his wife: “Forget me not. So there’s a song on the show called “Forget Me Not,” which Stephens sings like a dive to his wife:

All I want is that this ink is
Another reason you think of me.
I would shake hands
Just so you can catch it.
I would give my heart,
But you already have it.

Robert Overacker (Jake Long), altruistically thinking the stunt would help him raise money for the homeless, rolled over the falls on a jet ski and drowned. So there’s a song on the show called “Jet-Ski” during which the ensemble members come together in a fun way as the Overacker vehicle rolls to its death.

A darker tale is that of Jean Lussier (Kyle Secula), who survived the fall into a huge “Rubber-O-Sphere”. Thereafter, he sold memorabilia pieces of the ship until supplies ran out, at which time he peddled counterfeits cut out of inner tubes. So there’s a song on the show called “Made My Livin'” in which Lussier boasts about the art of his scam:

Mmm, I made a living,
Yes, in just one minute.
167 feet ain’t so bad
When there are profits to be made.
So go ahead and approach.
Get your eye on the masterpiece.
Relax! Seize your moment.
Come on and buy yourself one
Piece of history.

And so on the show: imagined vignettes musically linked to each of a baker’s dozen daredevils.

As killers, who has historical and other invented characters, the niagara The cast is mostly made up of real-life characters, with two interesting exceptions: Sunny (Aubrie Dell’Agnese) dance-anthropomorphizes the pet turtle who came to dive and survived just fine even when his owner snapped. neck, George Stathakis (Adam Yasztremsky), choked to death. And Lost Spirit (Kelly Stoneberger) ethereally evokes in an aria the indigenous myth of Lelawala, who is commemorated as the Maid of the Mist.

The production presented at the DCAC is more of a showcase than a world premiere, an intriguing but still rough work in progress. A provocative theme of the show is the search for what motivated each of these people – which becomes a search for the purpose of the show itself. As Bobby Leach sings in a challenge to the organizer, Jesse Sharp:

That is why ?
Can’t hear the roar?
These stunt stories
And making us all relive,
That is why ?
Surely you must know that.
There must be a reason.

I left thinking that the answer is not yet obvious.

What’s obvious is that the show could benefit greatly from a better-resourced production and improved execution. The scenes connecting the musical numbers and the arc of each act are sometimes inscrutable. Singing and playing are uneven. The stage is far too small for the overly ambitious choreography. There is a lot of distraction in the direction. The show is too long at least a third …

However, there is a really promising property here. It is based on quirky yet gripping real-life dramas about individuals driven by dreams and illusions. And it’s really worth listening to.

Duration: 2:45 am including 1 intermission of 20 minutes.

The Wheeling Symphony Orchestra is still making music on the road