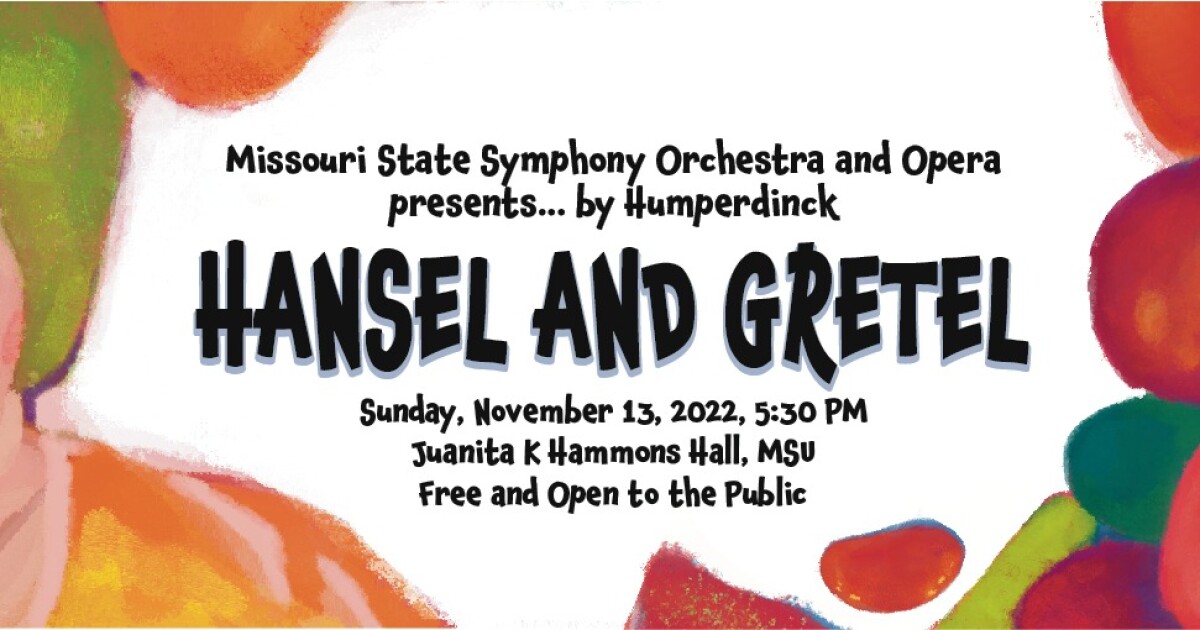 The production, sung in English and shortened to approximately one hour in length, will take place on Sunday, November 13 at 5:30 p.m. at Juanita K. Hammons Hall for the Performing Arts. Admission is free and open to the public; there are no tickets required. MSU Opera Program Director Dr. Ann Marie Daehn joined us on “Arts News” to talk about this performance.

“It’s the most incredible collaboration,” Daehn said. “Dr. Chris Kelts, my colleague, is so in love with this piece, and the singers really love learning from him. And just having this whole orchestra in the pit [Hammons Hall] is just a really special learning experience, but it’s also really such beautiful music and theater.”

Considering that Engelbert Humperdinck was a disciple of [19th-century German composer Richard] Wagner, the orchestra for this supposed “children’s opera” is huge, Daehn said.

“It’s surprisingly big,” she explained. “I just poked my head there [in the orchestra pit]. I’m not sure of the exact number, but I was like, ‘Wow. They keep moving forward and forward,” and they are also far below the stage. So it’s quite a large group. It’s so lush and beautiful. And it’s just great for our students to experience something so big and sturdy, but also perfect for their voices at their age.

Daehn cut the opera from around two hours to around 65 minutes.

“It’s kind of a delicious morsel of all the best in history,” she said. “And you get the best music.”

She assured me that no characters were lost in this abbreviation.

“Every character is there,” she said, “and every character is still pretty big in equal proportion. But we just miss some of the rehearsals. And you get all the orchestral parts, but maybe not their entire length. It’s like a buffet where you take just what you need to fill your stomach and soothe the taste buds, but without missing anything.

The show will run from start to finish with no intermission. With free entry and no tickets, Dr Daehn said members of the public can “just come and sit wherever you want to sit. [Hammons Hall] is a large open space. And I moved around during rehearsal, and there’s no bad seat in the house. The balance is excellent. The singers are just – they are so strong. I feel really lucky to have the students we have.

Is the witch interpreted by a male or female singer? (Character tenors often play the role, although it is written for a female voice.)

“Yeah, we could do either one,” Daehn said, but they went with a singer.

“Zoe Meyer is her name. She’s in her second year, if you can believe that. And she came and did her audition. And she just has such a big personality and such a loud instrument. And Dr. Kelts looked at me and I looked at him and he said, ‘Well, I think you have your witch right there!’ And she just does a fantastic job.

The production features an all-student cast, which Daehn is very keen on. “It’s one of the things I find most important in a university. You know, why do a show if you can’t cast it with your own students? The idea is that they are there for the experience.

Noting that MSU’s opera program is “big on heart and light on money,” Daehn said the stage production is “a very suggestive type of setting, but it looks really cute and it does it all. what we need to do. He does the job. You really get a bit of that Candyland feeling when we’re there for the witch scene. And the actors make you feel like you’re there.