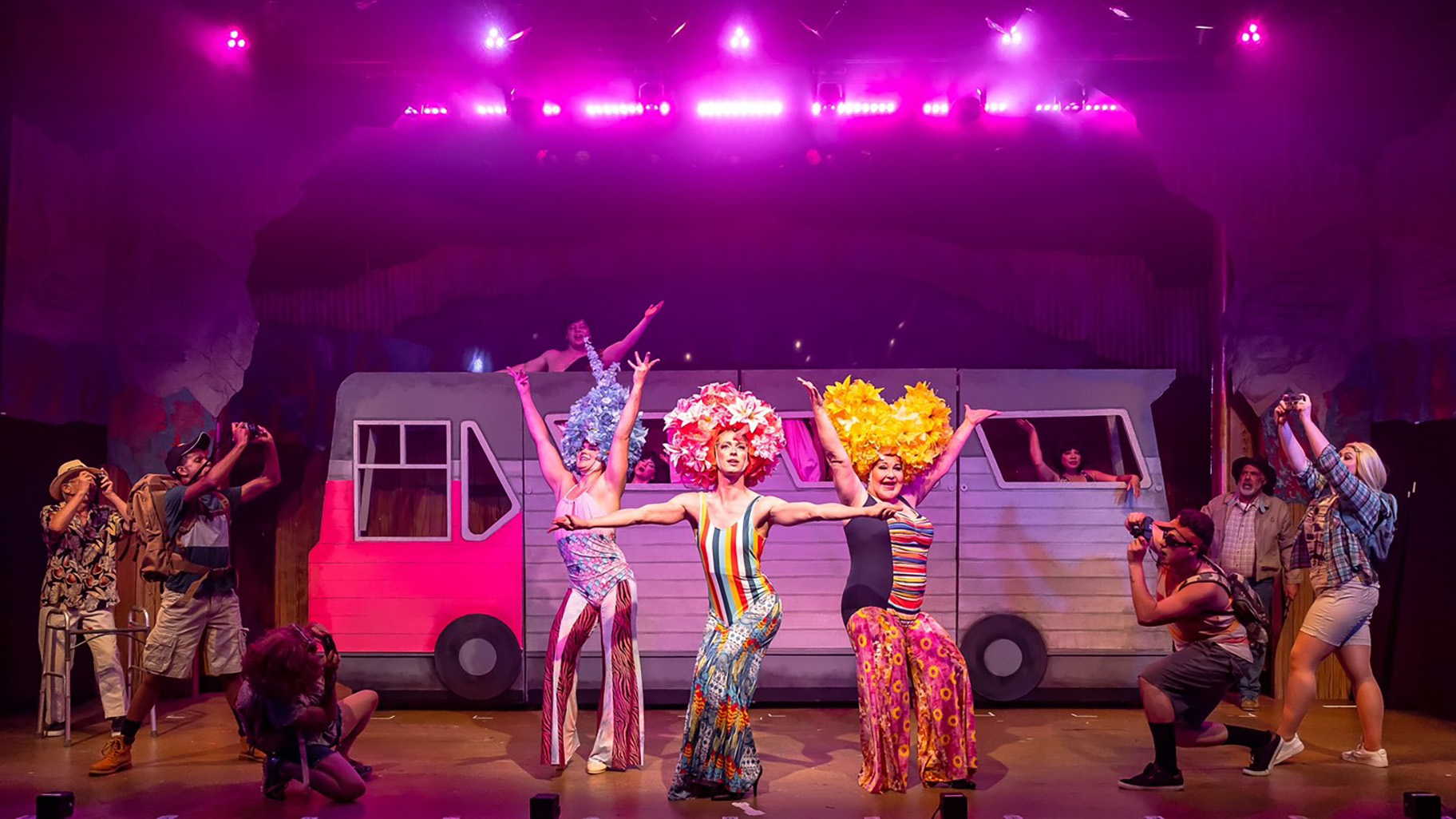 From left, Shaun White as Adam, Josh Houghton as Tick and Honey West as Bernadette in ‘Priscilla Queen of the Desert’ at the Mercury Theater. (Credit: Brett Beiner)

The 1994 release of Stephan Elliott’s film ‘The Adventures of Priscilla, Queen of the Desert’ was a surprising box office success and a trailblazer as it told the story of two drag queens and a recently widowed transgender woman. who travel by bus to perform at a club. in a remote desert town in central Australia. The film has even been credited with bringing LGBT life into the mainstream of pop culture.

The story was then turned into a musical jukebox by Elliott and Allan Scott with a Sydney debut in 2006, a London production in 2009 and then a Broadway opening in 2011. Now a wildly exuberant production, ideally performed and fabulously conceived of the show – superbly directed and choreographed by the always formidable Christopher Chase Carter – has arrived on the stage of the Mercury Theater in Chicago.

And best of all, on top of all its drag tropes, glitzy outfits, and ideally flashy riffs on roughly two dozen songs (pop classics, country classics, and even a bit of Broadway and opera), the show also proves to be quite emotional. father-son love story.

It all starts with a rousing nightclub number with The Divas (the brilliant and powerful trio of Lydia Burke, Heather J. Beck and Jessica Burke Seals), who sing and dance like a storm to “It’s Raining Men.” They’re joined by Miss Understanding (Darren Patin as High-Energy Dance Queen), for a jaw-dropping performance of the cynical hit song, “What’s Love Got to Do With It?”

Enter the most crucial cast member, Tick (played by Josh Houghton, a tall, thin actor who plays the big-hearted drag queen). Tick ​​is still on good terms with his ex-wife, Marion (in a nice Brittany D. Parker twist), and has yet to meet their 8-year-old son, Benji (in a brief but most winning performance by Gabriel Solis). And when Marion calls him and asks him to do her a big favor and bring a number to her resort town of Alice Springs, the remote desert town, things get under way.

Tick ​​is joined by Bernadette (slickly played by Honey West), a newly widowed trans showgirl from yesteryear, and Adam (cut work by Shaun White), an aggressively macho queen. And to get to their destination, they buy an old bus which they paint an eye-catching pink and divide into changing rooms.

Along the way, the bus is marked with hateful graffiti, but an even bigger problem arises when it breaks down in the middle of nowhere. Coming to the rescue is Bob (Michael Kingston), a local mechanic in his late middle age who still remembers Bernadette’s performance from years ago. He is now married to Cynthia (Ayana Strutz, a phenomenal dancer-acrobat who rocks the house) a sassy and rebellious young woman who could very well be his “mail-order bride”. 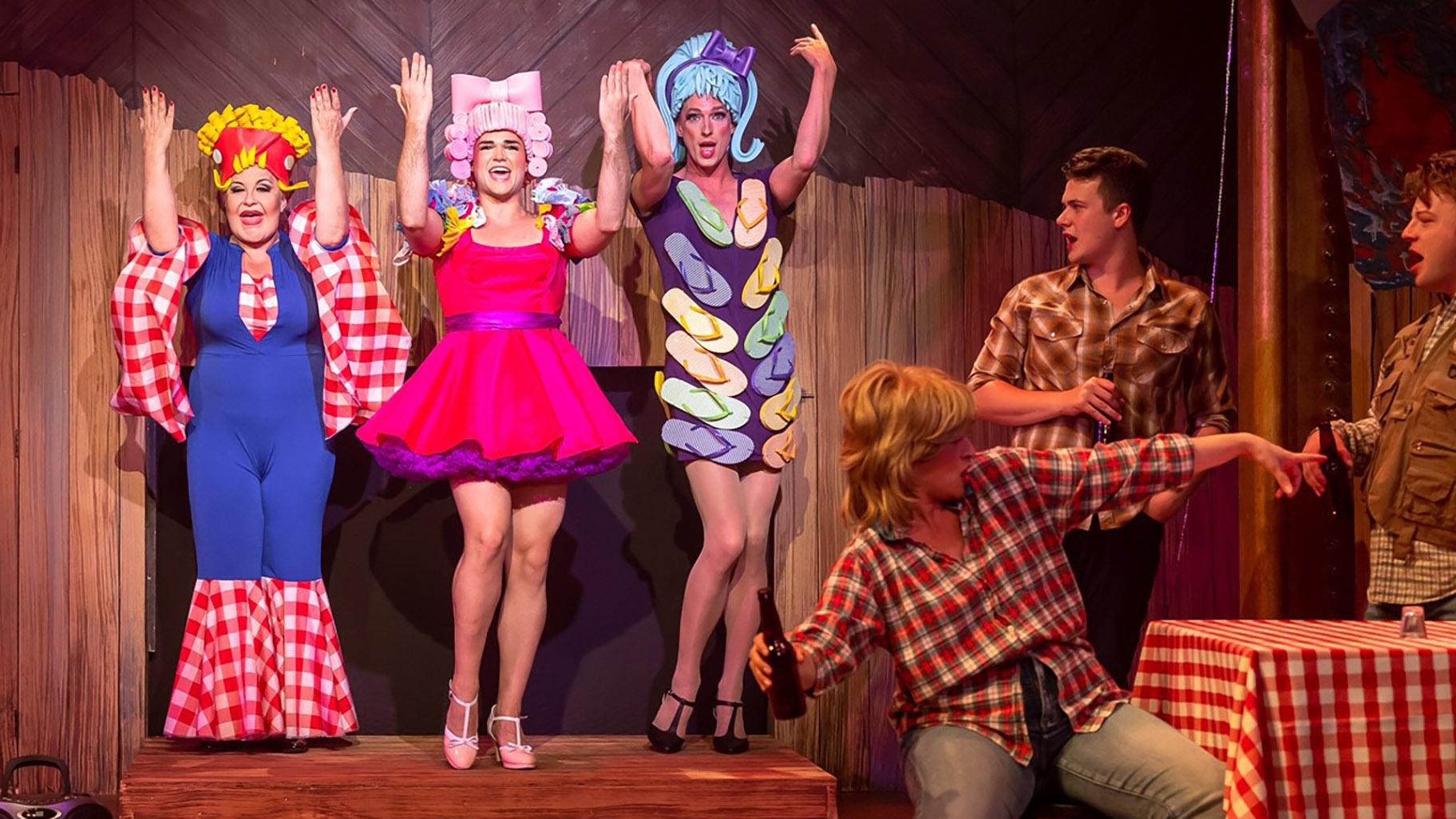 From left, Honey West as Bernadette, Shaun White as Adam, and Josh Houghton as Tick in “Priscilla Queen of the Desert.” (Credit: Brett Beiner)

Before the artists arrive at their destination, almost at the very last minute, they also run into trouble at a local bar. This is where Adam, always the flamboyant teaser in sexy outfits, is recognized for who he really is and gets beaten up badly by the local thugs.

The infinitely energetic cast of the series is ideal. Designer Robert Kuhn’s suits are a dazzling sight on their own, right down to the collection of stilettos. The same goes for Keith Ryan’s countless wigs. And the scenography by Jonathan Berg-Einhorn (notably the mobile bus), as well as the lighting by G. “Max” Maxin IV, skilfully suggest several sites.

As for the music, although there is no live orchestra for the show, you can easily be fooled into thinking that its pre-recorded sound is simply from off-stage musicians. Music director Eugene Dizon (along with sound designer Carl Wahlstrom) did a terrific job of making every note ring true. And the cast’s powerful vocals are ideal throughout, from Tick’s rendition of “I Say a Little Prayer,” to the hilarious staging of “MacArthur Park,” to Adam’s brilliantly comedic lip-sync. of “Sempre libera (Forever Free)”, an aria from Verdi’s “La Traviata”. And there is much more.

But in the end, what really takes the cake are Tik’s heartbreaking words after bonding with his young son: “You’re the best mistake I’ve ever made.”

Honeytree will perform at the outdoor theater | The star