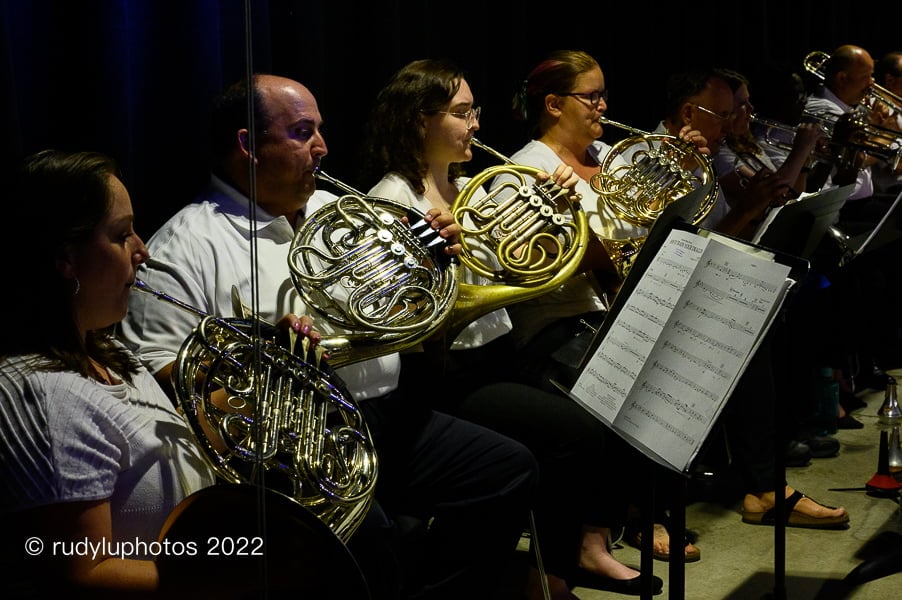 It was a really ideal evening for a Pops concert. The Schenectady Symphony Orchestra delivered the promise of a finally cool and beautiful evening with a “Night At the Movies”. Directed by Glen Cortesethe orchestra guided the audience through an evening of music from film/television soundtracks.

“The music behind a film’s visuals often complements a film’s narrative,” Maestro Cortese reminded us. He used the example of the opening sequence in “Jaws”, where the opening shots are over the ocean. These being shown on their own, have little drama. The 2 notes composed by John Williams combined with the moving image create tension and surprise leading to the appearance of the shark. He also reminded us that music can also be part of the soundtrack of our imagination. He invited us to close our eyes and use our imagination to create a story while listening to soundtrack music.

With this in mind, the orchestra performed several dramatic pieces of music that one can use their imagination to transport themselves to other places and times. Opening was Aaron Copland”Marching Band for the Common Man“, and the closest was “Star Wars: The Force Awakens”.

In between were several overtures and sequels that encapsulated music and plots from well-known movies and TV shows. “West Side Story”, “Harry Potter Symphonic Suite”, “The Cowboys”, “Star Trek Through the Years (themes from many Star Trek movies and series)” and “How to Train Your Dragon”.

To complete the entertainment of the evening, the singer Mia Scirocco sang many songs that originally came from the movies or were revived by the movies. Cab Calloway’s 1931 hit “Minnie the Moocher” was revived by the 1980 film “Blues Brothers.” Feeling Good” were also performed by Ms. Scirocco.

It was definitely a light family outing. Don’t worry about heat or humidity. Just an evening to savor without serious thought.

The London Symphony Orchestra to tour Australia in 2023

Jeff Harner is back at the Laurie Beechman Theater with I Know Things Now: My Life in Sondheim’s Words