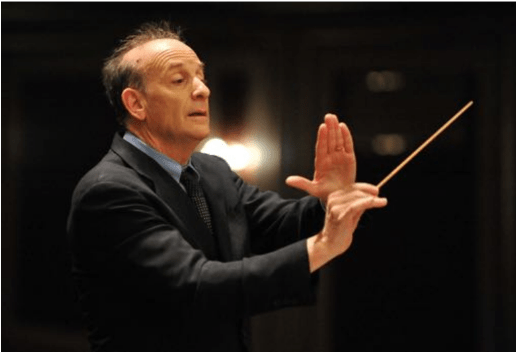 Larry Rachleff, former musical director of the Rhode Island Philharmonic Orchestra, died Aug. 8 in Houston, TX. He served as Music Director from 1996 to 2017 and conducted his last concerts with the orchestra in May 2017, his farewell as Music Director. This concert featured his wife, mezzo-soprano Susan Lorette Dunn.

Rachleff was also the Walter Kris Hubert Professor of Conducting and Music Director of Symphony and Chamber Orchestras at the Shepherd School at Rice University in Houston, Texas. From 2004 to 2008 he was Music Director of the San Antonio Symphony Orchestra. He received honorary doctorates of music from Roger Williams University and Providence College.

“For the second time in less than a month, the RI Philharmonic family has been devastated by a loss. The passing of Larry Rachleff, so soon after that of Bramwell Tovey on July 12, further saddens the souls of the Orchestra and School of Music,” said David Beauchesne, Executive Director of the Rhode Island Philharmonic Orchestra and School of Music. “Larry brought an intensity and vision that lifted the Orchestra to new heights. new heights.His relentless focus on artistic quality, dedication to excellence, and advocacy of music education have been embraced by the orchestra, the public, and the greater Rhode Island community.

Summer festival engagements include Tanglewood, Aspen, Interlochen, Chautauqua, Brevard Music Festival, Music Academy of the West, Opera Theater of Lucca, Italy and the Grand Teton Music Festival. In 1993 he was selected as one of four American conductors to conduct the Cleveland Orchestra at Carnegie Hall under the mentorship of Pierre Boulez.

Rachleff was a strong advocate for music education in public schools. He has conducted state orchestras and festivals in virtually every state in the United States as well as in Europe and Canada. He has also served as Senior Conducting Teacher for the American Symphony Orchestra League, the Conductors’ Guild and the International Workshop for Conductors in the Czech Republic.

Rachleff lived in Houston with his wife, soprano Susan Lorette Dunn, and their young son, Sam.

Like Newport Buzz? We depend on the generosity of readers like you who support us, to help us in our mission to keep you informed and entertained with local and independent news and content. We really appreciate your trust and support!