The Kentucky Symphony Orchestra continues its 28th summer series at Devou and Tower Parks with a tribute to an icon of American musical theater. Before his passing last November, Stephen Sondheim spent 65 years writing hit songs and musicals for the Broadway stage, revues and films.

Sondheim grew up as a neighbor to the legendary Oscar Hammerstein, who became Stephen’s mentor. In the mid-1950s, Sondheim got his break when he was brought on the team to write the lyrics for West Side Story. He never looked back and began writing both the music and lyrics for his 16 musicals, all of which are produced and released around the world every year.

The KSO will perform tunes from 11 Sondheim musicals and are delighted to have Pamela Myers (one of Stephen’s proteges and original cast member of the company) as the evening’s host to sing along and share thoughts and thoughts. first-hand insights into the composer and his music.

“Given the level of talent gathered and the costs associated with the production, many thought I was crazy not to make it an indoor concert by subscription. However, stepping out ahead of Sondheim’s upcoming tributes allows the KSO to tap into its network of Broadway veterans and other incredible local talent to share the range, craftsmanship and personal connection of words and music. of Sondheim with those in our regional community, who otherwise could not afford it. said KSO music director James Cassidy.

Bring blankets, picnics or lawn chairs. Concessions and/or food trucks are available in the parks.

For the Devou Park show, TANK offers shuttles from Covington Catholic for $1 each way. For more information, registration (for weather updates and draw odds) and directions, visit the KSO at www.kyso.org or call (859) 431-6216.

A suggested donation of $5 (per person). Free parking at all sites. Sunday’s performance at 7:30 p.m. will be streamed live on kyso.org. 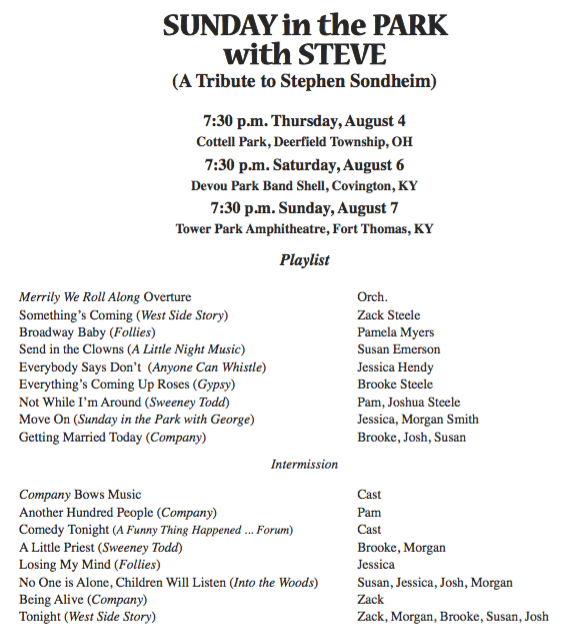