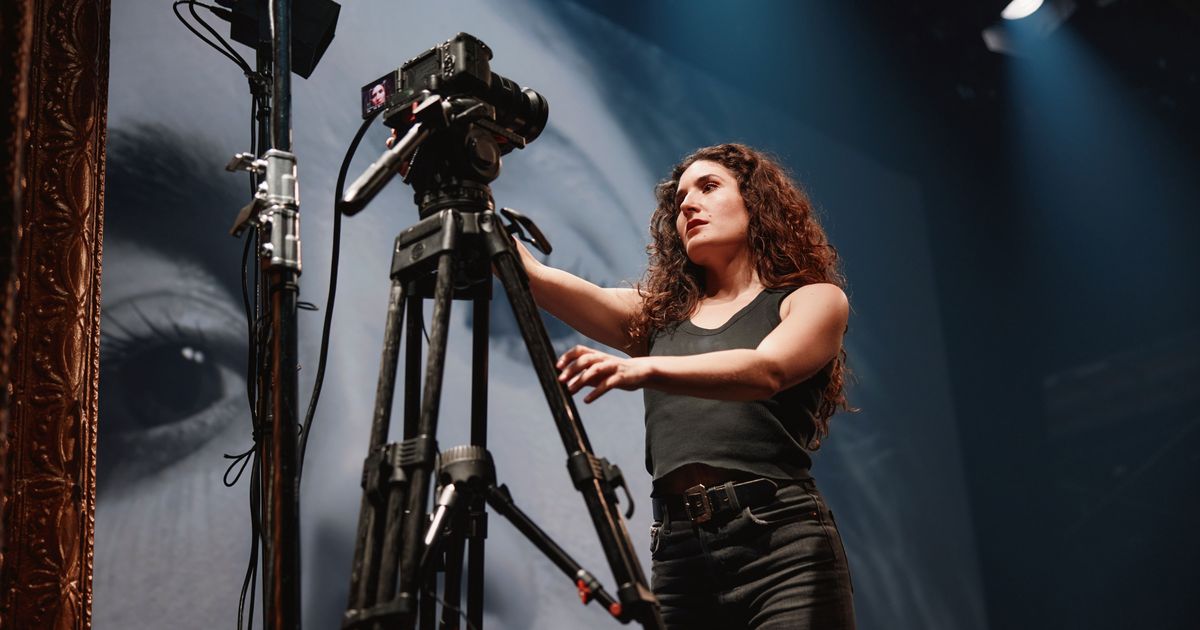 “Kate” by Kate Berlant at the Connelly Theater

Kathryn VanArendonk is a critic who writes about television and comedy. She gets mad when people say TV is a 10 hour movie.

This review contains spoilers for kate.

About a year ago, I saw a comedian’s hour-long autobiographical show. It was a carefully crafted tour through definitive childhood experiences, personality quirks, core traumas and the loneliness of being a person, full of jokes that eventually gave way to scenes of gravity. The hour was unique to the comedian’s life and experiences, but it was also instantly recognizable as trendy, where the best and most “important” humor was really about sadness and trauma. The ending was meant as a moment of revelation, a bit of staging where the props turned into a portrait and were presented with the satisfying sharpness of an algebraic solution. Here is the true sum of this person. Here comes the honesty. What courage to be so vulnerable!

I had largely forgotten about this show until I walked into the lobby of comedian Kate Berlant’s new solo show. kateand I realized that at every turn, kate is an elaborate joke on this exact style of show I saw a year ago. Like much of Berlant’s work, kate is an embodiment and celebration of performance, a towering and beautifully produced monument of superficiality, comedy, fun, excess and self. She is not interested in the self we quietly wonder about in the dark nights of our souls – Berlant’s obsession is the outer self, the self we project, the self we organize, manicure and present to others. All that digging to locate inner truth cases? Trauma excavation as the best way to be vulnerable? Vulnerability as honesty? No thanks! If this lack of interest in interiority has the side effect of making everything a little hollow, so be it.

kate opens before entering the theater. (Excuse me, the theater.) The lobby is covered in Kate iconography: Berlant’s black-and-white decals affixed to every surface; a model displaying the black tank top, belt, jeans, and boots that Berlant wears in the show; word Kate stuck on switches and outlets; a bright wall with images of Berlant in various poses of aggression designed for selfies. Berlant herself sits on a bench just next to the ticket office under a huge close-up photo of her own eyes, wearing large dark sunglasses and tapping dispassionately on her phone. The bench she’s sitting on says “KATE”. The sign on his lap says “IGNORE ME”.

kateThe total engagement of the bite is the show’s most glorious achievement. The show has a plot, of sorts. Berlant plays the story of herself as a young person who wants to become a performer. She’s a kid herself, dreaming of performing in front of an audience as she gazes up at the stars as she sits on her porch. She begins performing in front of a camcorder in her childhood bedroom before being scolded by her mother (Berlant, again, doing a deliberately nonsensical Irish accent), who insists that Berlant’s affect is too broad. and extravagant to work in front of the camera. The camera is not for her! She should never try! Then she moves to New York, where she again plays with appearing in movies and is again crushed to realize that her over-the-top style isn’t working. At each stage of this evolution, Berlant plays on the joke of the postulate. Here she is, on stage, performing the most awkward and absurdly clownish scenes in this tale of doom: being too awkward and clownish to have a career on screen.

Throughout the show, she loses her “character”, interrupting the stream to speak directly to the audience about how the show is going or to converse with a stage manager behind the scenes about the timing of particular sound cues or technical effects. During some of these interruptions, the house lights come on. After all, we are playing the role of an audience. Can’t we feel that? Berlant suggests in one of his direct interruptions to the audience. Don’t we know how much we participate in this rigamarole, this false theatrical experience? At the same time, Berlant teases a dark secret, something that hides beneath all that overly expressive playfulness. Surely this hidden trauma is the reason why she is the way she is. The secret looms, promising the pleasure of disclosure and the existence of a solid foundation beneath all this melodrama.

Berlant’s performance is exquisite, flawless and absolutely deadpan. In a nightclub scene, she dances with startling precision, her overly snappy movements telegraphing parody even as her deadly serious expression screams It is serious! She moves from one register to another with incredible agility. Sometimes Kate’s transition from a big, nerdy character to a dry actor as a professional actor feels like a sudden snap of the finger. Sometimes a stunning parade of different Kates glides across her face in a matter of seconds, and it’s like watching someone shuffle a deck of playing cards and then gracefully unfold all the face cards at once. Here’s the Kate who thinks it’s all a joke, then the Kate who cares too a lot, then the Kate in her mother’s character, then the Kate laughing with the audience, then the Kate laughing for the audience. (And the laughing Kate at the audience? Most likely!)

The remarkable performative feat is matched and supported by kateThe incredible production and direction of Bo Burnham, accustomed to playing with the idea that the only truth is the performance. The key production choice is a live camera that sits to the right of the stage. Throughout the show, Berlant turns to the camera and a black-and-white stream of her face appears on a stage-sized screen behind her, transforming her on-stage performance into the on-screen performer her mother insists. on the fact that she is constitutionally incapable of becoming. You end up spending a lot of time during kate thinking precisely about the shape of her mouth, its elastic elasticity and its angles and curves à la Lucille Ball. Whether or not this on-screen image of Berlant is live or pre-recorded becomes its own joke, and the disconnect between stage gesture and screen is both distracting and mesmerizing.

Inevitably, the time comes when the dark secret must be revealed. All the signifiers we’re playing a silly game are falling off: The house lights come on. She drops all exaggerated gestures and goofy accents. She tells the crowd that they are free to react as they see fit – no need to play the right audience. It’s just that people are honest with each other for a while. The story begins again in childhood, and it builds up to the anticipated moment that erases all the trauma! And then… splat. The promise of honesty turns out to be another trap. The show ends, Berlant throws a tantrum, then she insists on doing another performance to demonstrate that she can, in fact, be vulnerable on screen. When she finally succeeds, the audience explodes with applause and relief. She did it! We all did it, together! The “it” is a tear rolling down her cheek, a piece of physical evidence acting as a symbol of an inner self. The emotional vulnerability of this hip comedy about self-disclosure is still a performance, says this tear. There’s nothing wrong with enjoying a show without needing it to be something traumatic. But it’s harder to love when the central idea of ​​that performance is that the performance itself is good. The parody begins to look like a maze or a haunted house. The first hatch through the seriousness is a shocking surprise. The fourth becomes tiring.

A year ago, I walked out of this comedian’s one-man show with a very bad taste in my mouth, my whole body cowering at the overly polished presentation of a performer who scripted and acted honestly. kate is a clever and often wildly funny rebuttal to all that seriousness, a circus-worthy counterbalance to the idea that humility and intimate personal details are the path to transcendence. In this regard, I was delighted to katedelighted and happy on board for the ride.

Except that during a scene of kate, Berlant plays a patron in a smoky jazz club, and she holds up a flashlight to choose an audience member to play the role of the bartender. In my performance, she chose a man near the back of the orchestra and, as an unfazed patron, asked his name. “Foam,” he said. Berlant paused. “Mousse?” she asked. “Mousse.” ” … Mousse ? A look passed over Berlant’s face, his lips pursing around what could have been genuinely sincere laughter for the tiniest of moments. For a second, she looked legitimately surprised. “So, Mousse“, she said, returning to her character. kate rolled along, and Kate’s laughter again took on the fragile quality that communicates that everything is a game. But for a moment, I felt like I had seen some serious emotion, and I couldn’t m to stop wanting more, even though I knew my wanting was the butt of Berlant’s joke.

Sign up to get New YorkThe week in review.

By submitting your email, you agree to our Terms and Privacy Notice and to receive e-mail correspondence from us.