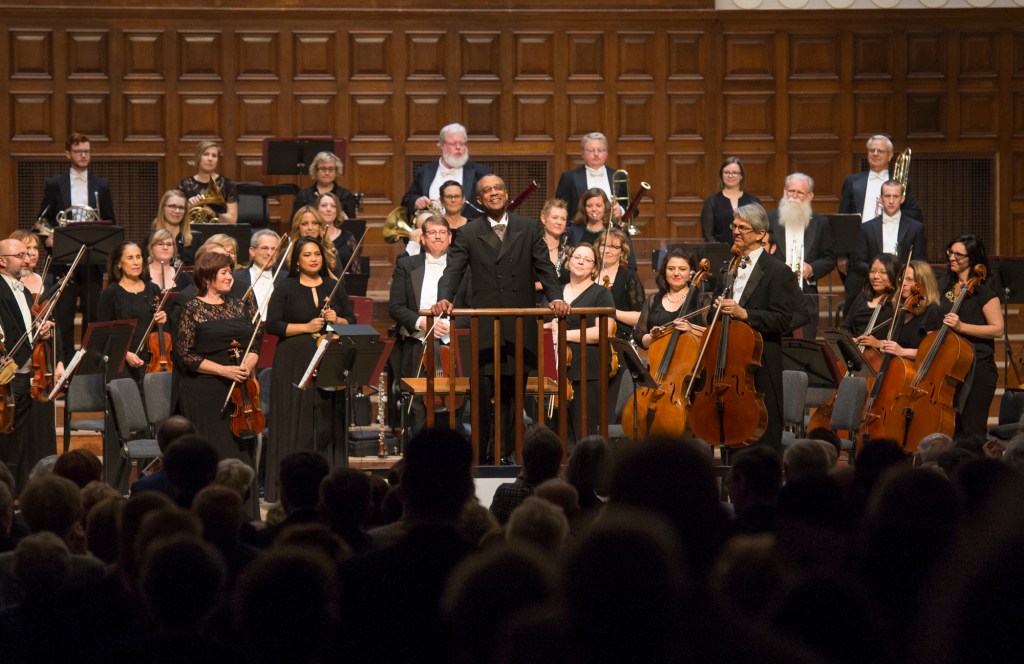 Instead, he thanked the musicians, the audience and everyone involved in the Redlands Symphony for the 33 years he spent with the orchestra.

Saturday’s concert at the University of Redlands Memorial Chapel was Robertson’s last with the Redlands Symphony before he retired as music director and conductor, and the audience obviously knew it.

Dave Maupin, chairman of the board of the Redlands Symphony Association, emphasized the word love in his pre-concert remarks, and love and enthusiasm were in the air, as many in the audience Couldn’t help but stand up as they applauded Robertson on stage before the music started.

For his last Redlands Symphony concert, Robertson chose to start with the music of Beethoven, his all-time favorite composer, and end with Mozart, who he says is very close to Beethoven.

In between was the evocative “Knoxville: Summer of 1915” by Samuel Barber with soprano Angel Blue, who graduated in 2005 from the University of Redlands.

In his pre-concert remarks, Robertson compared the music of Beethoven and Mozart, looking back on his previous experiences as a pianist during his 65 years of playing.

“If I had to choose a composer who touches me deeply, it would be Beethoven, perhaps because of his ability to overcome obstacles,” said Robertson. He spoke about the power of Beethoven’s music and said that as a pianist he felt music in his hands when conducting Beethoven.

“It’s wonderful as a farewell gesture to do one of her grand openings,” Robertson said of the opening # 3 of “Leonore” which opened the concert.

Unlike Beethoven’s power, Robertson said that when a pianist plays Mozart’s music, “there is an elegance, a charm, a simplicity, a purity.” He compared Mozart’s music to a sorbet that cleanses the palate.

For his final performance with the Redlands Symphony, Robertson chose Mozart’s Symphony No.40, the Mozart symphony close to his heart.

Robertson and the Redlands Symphony Orchestra gave solid and satisfying performances of Beethoven’s Overture “Leonore” No. 3 and Mozart’s 40th Symphony.

The “Leonore” Overture is dramatic and powerful, with the emphasis on the dramatic in Saturday’s performance.

And Mozart’s 40th Symphony, although it has the sherbet-like elegance that is Mozart’s hallmark, is also the most original of Mozart’s symphonies, according to the program notes by James Keays, “and a had the greatest influence on future composers ”.

It was one of Mozart’s last three symphonies, written in 1788, and has an intensity that perhaps anticipates the soon-to-be-released music of Beethoven. Maybe that’s why it’s closest to Robertson’s heart.

In the stream of consciousness text, Agee recalls a summer evening in 1915, when he was 5, with his family at home in Knoxville. The text and music evoke a warm summer evening with people sitting on the porch and lying on quilts in the backyard, “casually talking.”

The sweet evening is interrupted by the sound of a streetcar, and there is a foreshadowing of death and the call “God bless my people …”

But the effect is sweet and poignant, rather than dramatic, and after Saturday night’s concert, a fragment of “Knoxville: Summer of 1915” comes to mind.

The rich, warm sound of soprano Angel Blue was just what was needed for “Knoxville”, though occasionally her tone and that of the orchestra almost merged into one. She has a luxuriously rich velvet voice in all registers.

With a little research, I found out that I had heard Blue sing “Knoxville” – in July 2007 at the Redlands Bowl – and enjoyed that at the time as well. It was two years after Blue graduated from the University of Redlands.

She made her orchestral debut with the Redlands Symphony under the direction of Jon Robertson, so Saturday night’s concert was kind of back to basics.

Homecoming means family, and during Robertson’s last concert with the Redlands Symphony, that meant his extended family had joined him on stage after Mozart’s last notes disappeared.

As if that wasn’t enough, Redlands Musical Theater star Debbie Prutsman took the stage and sang a “Valediction for Jon” while Co Nguyen, assistant conductor of the Redlands Symphony, led the orchestra.

The audience, provided with lyrics and music inserted into their programs, sang in chorus: “May love and laughter illuminate your days… May peace and music fill your world with joy forever. God bless you and keep you until we meet again.

“You definitely know how to make a guy cry,” said Robertson.

“Thank you very much for these wonderful 33 years.”

He wished the orchestra a “magnificent future”, declaring: “Your new musical director will take this orchestra to higher heights again and I know that you will all continue to support him, because it is this support that is needed. to grow.

His last words were: “So to all of you, God bless you and I love you. Thank you.”

To see Robertson and his family on stage and hear his remarks, visit www.facebook.com/redlandssymphony.

Betty Tyler has an MA in Music and has taught piano at Redlands.