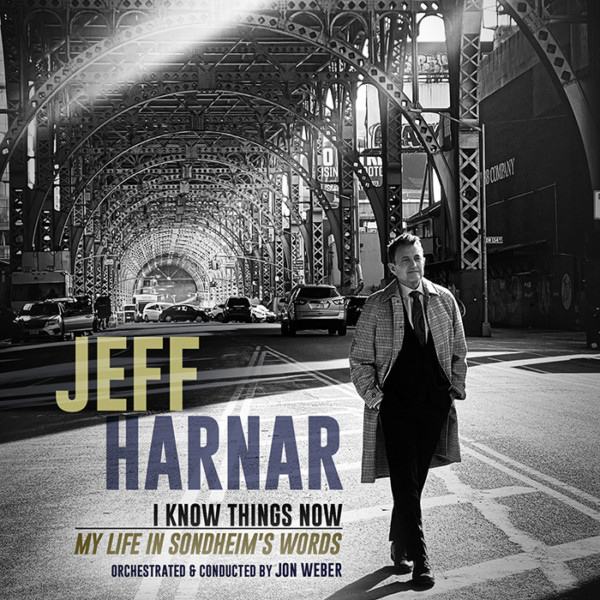 Jeff Harner is back at the Laurie Beechman Theater with I Know Things Now: My Life in Sondheim’s Words

Jeff Harner – the award-winning nightclub and concert artist – will celebrate his new album PS Classics I know things now: my life in the words of Sondheim with an encore concert engagement at New York’s Laurie Beechman Theater for two performances on Sunday evenings September 18 at 7:00 p.m. and September 25 at 4:00 p.m. In addition to musical director Jon Weber on piano, Harnar will be joined by Steve Doyle on bass and Ray Marchica on drums. Harnar will also perform a special show at Middle C Jazz in Charlotte, North Carolina on Tuesday, September 20. The album, which is currently available on CD and digital format, features a 20-piece orchestra led by renowned jazz piano virtuoso Jon Weber (host of NPR’s “Piano Jazz”) and is produced by Bart Migal, with Ronald Thomas as executive producer. It is currently available on Amazon.co.uk. Tickets for Jeff’s concerts are available at JeffHarnar.com.

For the show’s inaugural engagement in June, the New York Sun described the evening as “singularly special, subtle but radical and, simple but effective”. Chronicles of Times Square says “If you can only attend one cabaret show, I know things now is the one. It was one of the smartest, freshest shows I’ve ever been to and it gave me a whole new understanding of Stephen Sondheim’s words and music. Pizzazz Theater announced the concert as “a musical suite assembled with joyous intelligence, a truly remarkable individual event”. According BroadwayWorld, I know things now is “a marvel, a spectacle of powerful storytelling and one of the finest nights of cabaret likely to be found right now – unforgettable, flawless and completely original”.

Jeff Harner heard his own life story in the songs of the late Stephen Sondheim, the iconic composer and lyricist known for changing the landscape of musical theatre. Harnar has woven over 25 Sondheim songs – from familiar anthems like “Being Alive” and “Losing My Mind” to rarities like Dick Tracy“Live Alone and Like It” and “More” – in an original narrative, reimagining them for an LGBT+ audience and creating a self-portrait of a proudly gay New Yorker in the contemporary world. Weber, as conductor and orchestrator, recast the songs in a jazz idiom: a radical reinvention of Sondheim’s harmonies, a reinvention which the composer himself – seeing the spectacle on stage – not only approved but encouraged. Now PS Classics, Sondheim’s go-to label for its past two decades, offers another jewel to its Sondheim crown: a highly original and personal celebration of the artist.

“Words and music are by Sondheim… but the story is mine,” Harnar says. “That’s pretty much the only line in my own words when I present the show. The evening is unique in that it is sung, with nearly every word from my mouth a Sondheim lyric. And yet, the piece could not be more personal. In the words of Sondheim, ‘What more do I need?’ It’s a unique experience for me, as it’s my first solo performance sung as an openly gay man, honestly sharing my story and my heart…with the right pronouns. For the first time, the songs I have chosen, many of which were originally introduced by women, are clearly sung for and about the men in my life.

“My creative team on the project is a dream collaboration,” adds Harnar. “Our musical director, orchestrator and conductor, Jon Weber, brought a jazz vocabulary to the textures of these songs that is uniquely fresh. The stage version of I know things now is directed by Broadway legend Sondra Lee, who originated the roles of Tiger Lily opposite Mary Martin’s Peter Pan and Minnie Faye opposite Carol Channing’s Dolly Levi. Harnar recalls, “Sondra has been a name on my lips since childhood, when Mary Martin used to fly around our living room in the first color broadcasts of Peter Pan. To have her now, at 91, bringing her wisdom and guidance to my work is a miracle in my life.

Harnar has perfected this program with performances in Los Angeles, Chicago, St. Louis, New York and London. “Until now, Jon and I have played as a duo,” he comments. “For the album, we have 2o players, all superb Broadway pit musicians, bringing to life the arrangements Jon and I created, and which he orchestrated with so much imagination. This is my first solo album in 17 years, and the first I’ve created since the beginning with the album’s producers, Tommy Krasker and Bart Migal of PS Classics. It was a master class having their advice. They’ve worked closely with Mr. Sondheim on more than a dozen of his cast albums – not to mention his two solo records – so there simply couldn’t be better guides.

“On a personal note,” concludes Jeff, “Tommy and I are thrilled that my previous PS Classics album, the 2005 release Dancing in the dark – recorded in 40s – will now have a resolution with this album, I know things now, recorded in his sixties. We both know that the statements on this new album could not have been made at an earlier time in my life. At the time of his death, Sondheim was aware of and supportive of this enterprise and was eager to hear the rough mixes. In the last email Mr. Sondheim sent me, written 16 days before his death, he signed, “Thanks for doing the show – Steve.”