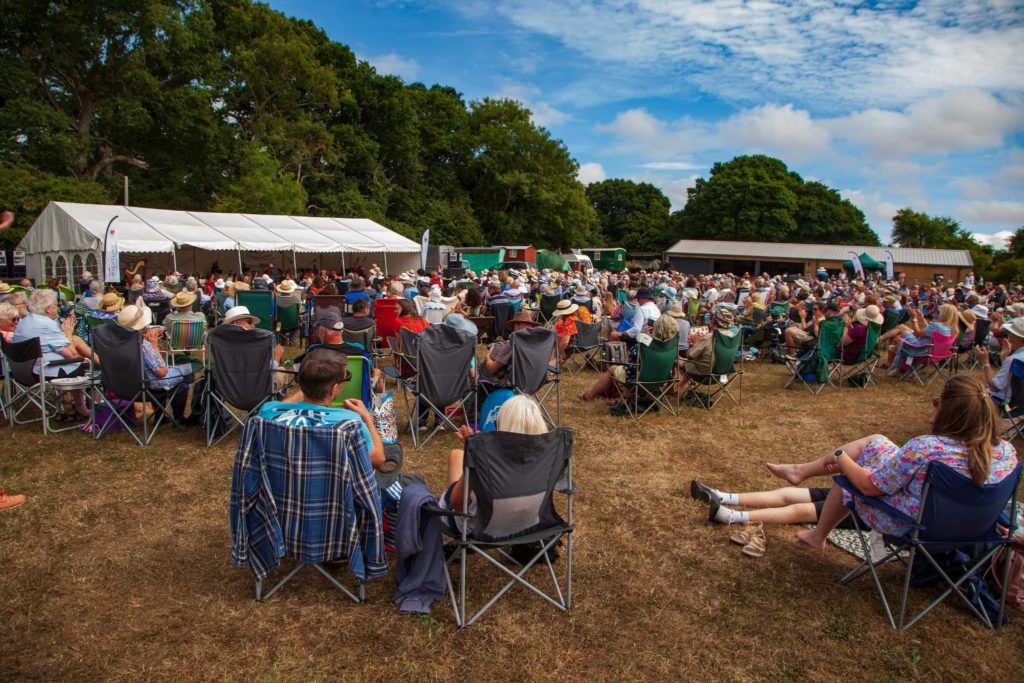 Last Saturday was a beautiful day. The Isle of Wight was at its best, with deep blue skies and bright sunshine.

In the middle of the island at Havenstreet, at the headquarters of the Isle of Wight Steam Railway, the car park was full and hordes of people were making their way through the wooded path to the entrance, laden chairs and picnics, bringing their children and various well-behaved dogs, and found their place in a large grassy area in front of a specially erected tent, to enjoy a fabulous open-air concert by the Montreal Symphony Orchestra. Isle of Wight.

Everyone was in good spirits, lulled by the mildness of the day, and there was a sea of ​​sun hats. I have never seen such a panoply of Panama hats and Hawaiian shirts in a train station.

Open-air underworld
The orchestra was also in a celebratory mood, smiling enthusiastically and chatting, until our conductor Jonathan Butcher appeared, then they launched into a lively performance of Orpheus in the Underworld, by Jacques Offenbach.

I saw him again recently after hearing him play at the Medina theater, and it was just as good, with the added bonus of hearing him outside, through speakers. Everyone responded enthusiastically, especially during the Can-Can section, and the applause was almost loud enough to drown out the sounds of trains at the station. It was lovely and started the afternoon off perfectly.

picturesque scenes
Jules Massenet was a prolific composer in Paris in the second half of the 19th century in Paris. It was never considered avant-garde, but its charming fourth suite was perfect for a summer afternoon.

Each section gave different musicians the chance to perform solo, and the melodies were alternately lyrical and dramatic, culminating in frantic bohemian dancing with a thrilling ending. Fantastic.

galloping train
Mr. Butcher presented the next piece, by Hans Christian Lumbye, entitled Copenhagen Stream Railway Galop. Lumbye is not remembered for anything else, but this glorious dance tune was written in 1844, inspired by a train leaving the station.

It begins very softly, amid clanking and bells and a shout of “All Aboard!”, and the music embarks on a frantic galloping dance tune as it accelerates its journey to the next station, where it slows down and stops. Presumably, passengers disembark, dancers retire for refreshments, and it all starts again. I could have listened to it all afternoon.

The Riddle of Nimrod
The ninth variation of Edward Elgar’s Enigma Variations is so famous that it needs no introduction. It became a national song, full of majesty and emotion, and the orchestra did it justice. These variations are always a puzzle, because no one knows what the original melody was, nor for sure which people were represented by each variation.

Even the legendary Nimrod is a puzzle, but he was known as a great hunter, who became a mighty king. Elgar had a friend named August Jaeger, which means “hunter” in German, but nothing is clear. I like it like that. The music is so serene and at the same time so fiery, and I respond to that so completely, at a level too deep to describe or understand, and the IWSO made me shed tears of pure emotion listening to it. , delighted.

Make way!
Eduard Strauss was the youngest son of Johan Strauss I and is not as well known as his father or brothers. He specialized in writing and conducting fast polka dance music, and his most famous composition is Bah Frei!, literally translated as “Make Way!”

This is another frenetic dance track reproducing a crazy train ride, also punctuated with whistles, rattles and other train noises. The orchestra had a lot of fun adding sound effects as they frantically tried to catch up to the required speed. It was a great ride!

History east/west side
The first half of the concert ended with selections from West Side Story by Leonard Bernstein. It was a sequel to music from the show, arranged by Jack Mason, and featured many iconic songs from the beautiful tragic tale of Romeo and Juliet, originally called East Side Story. The IWSO played this breathtaking music with tremendous energy and commitment.

It must be devilishly difficult to play, with its variety of musical genres, rhythms and moods, and I was spellbound and moved as I always am, no matter how many times I see the show, watch one either of the film versions, or just listen to it. I found myself in tears for the second time in the afternoon. Intermission and a beer were definitely needed after that.

Dinosaurs rule!
More musical genius played for us early in the second half, when the opening notes of John Williams’ thrilling score for Jurassic Park rang out across the station grounds.

Once again, music so familiar yet still so surprising after a number of listens, this time, with the woodwinds behind the orchestra, it was as if anything could suddenly emerge and be unleashed among us. There were so many great moments for each part of the orchestra playing their hearts out and producing beautiful solo moments, and I loved that.

My country
Gustav Holst’s sublime introduced the “Last Night at the Proms” section of the concert. I know this is a patriotic year, and I mean no disrespect, but I always thought this should have been our national anthem. It’s so dignified, and it completely speaks to how we all feel about our country, with dignity, simplicity and deep emotion.

It’s not about Empire, or war, or belligerence, and it’s fully inclusive, and therefore close to my heart. It’s also much easier to sing. I recently felt sorry for the Lionesses, struggling to reach the lowest notes of our current anthem. The IWSO makes a great version of it. It was a treat to listen to.

Australian composer, Jamaican rumba
Arthur Benjamin visited Jamaica and loved it so much that he composed the Jamaican Rumba, which became a huge hit, becoming so popular that everyone knows it, or at least recognizes it instantly from the first notes.

I loved hearing that the Jamaican government started sending her an annual barrel of rum as a thank you for making their country more famous.

It’s a joyful and catchy tune that makes you want to wiggle and jiggle. I certainly did. IWSOs are simply adventurous, versatile and filled with virtuosity.

Highlights from last night
The last part of the concert consisted of familiar pieces. First Henry Wood’s Fantasia on British Sea Songs, who also created the Proms. Each song features a different instrument, and all were beautifully played by the respective soloists. Attractive. This was followed by the rightly and hugely popular Pomp and Circumstance March #1. It’s thrilling and inspiring, brilliantly played.

The finale was Jerusalem, by Hubert Parry, in all its glory, with many choreographies of flags, applause and singing, conducted with great aplomb by Mr. Butcher, who became soloist and master of ceremonies. The pitch was a sea of ​​waving, dancing union jacks, and it was wonderful to see so many people united and performing together.

Two reminders
There were two reminders. Charles Williams’ first was Rhythm on Rails, familiar to those of us who remember the old BBC Morning programme, and beautifully depicts the sounds and excitement of old steam train travel. It was nice to hear again.

The second was Oxford Street, a walk by Eric Coates, depicting the traffic and bustle of what was then one of the busiest and most famous shopping streets in the world. It was lovely. And then it was over, and we all made our way to our different homes with happy hearts and big smiles on our faces.

Firstly, how nice it was to listen to good music like this outdoors, with all the random movement and noise not interfering at all with the music itself or my enjoyment.

Second, the conversations I heard from people around me expressing their amazement that such a thing as IWSO could even exist on a small island, and furthermore how good the quality of the music was. I already know this, but it was wonderful to hear this conversation so many times.

Finally, what a pleasure it was to be able to get up and fidget while listening to everything, and not have to be still and silent. I started my classical record listening at home, and I used to turn the volume up all the way and dance to it, so there I started again, albeit in a calmer way, and it was liberator. I think I should call it “jiggling”, but it was pure fun. Thanks again.

What a great gig! Thank you very much IWSO! Keep up the good work and take a well deserved break.

next season
The next season opens on Saturday, November 18 in Medina at 7:15 p.m. There will be a cello concerto by Dvorak, a Vaughan Williams London Symphony and a festive overture by Shostakovich.

Get your tickets now or simply take season passes. It’s going to be a brilliant season.

We’ll see each other there!