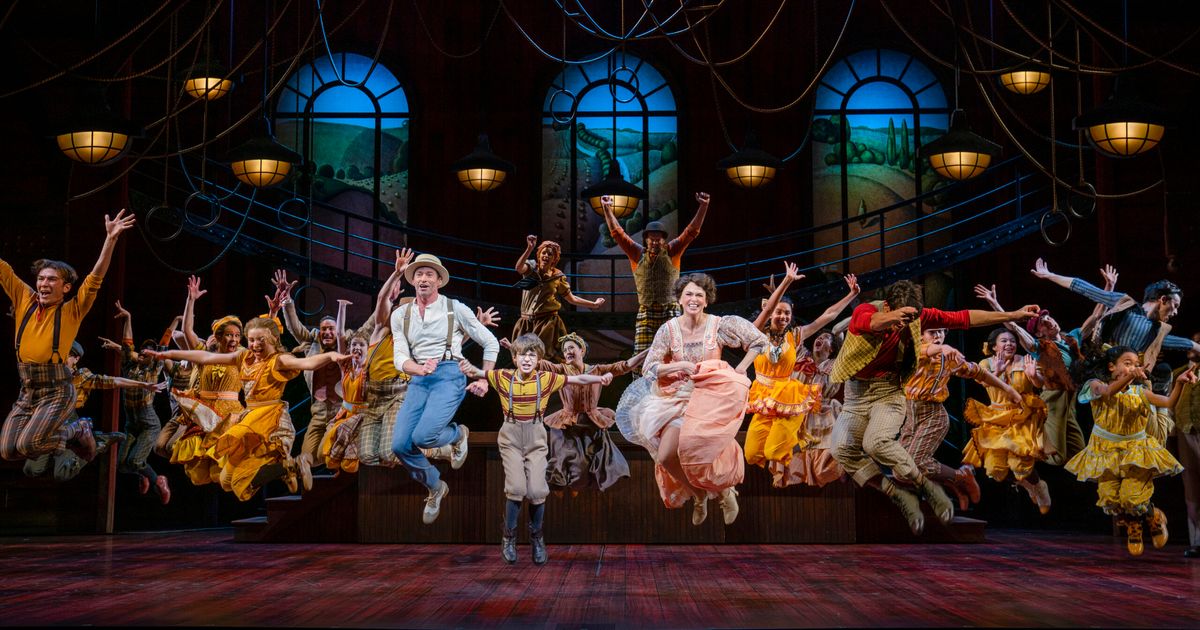 Hugh Jackman in “The Music Man” on Broadway

From music man, in the Winter Garden.
Photo: Joan Marcus

The music man want you to know that the old ways are the best. For the now-Broadway production, every detail has been downgraded to the days of yore, from the typeface on the Playbills to the red-white-and-blue title cards on the exterior to the heavy reliance on Star Quality. . It’s not a brand new, updated, anti-nostalgia take on a classic. Instead, you can sit in the Winter Garden where it’s the 1957 version of 1912 again. You won’t need to worry about anything beyond the comedy sweetness. musical con-man-redemption by Meredith Willson, itself a tribute both to Willson’s upbringing in Iowa and to his years as a flute player with John Philip Sousa’s band.

It certainly looks like a glitzy move from the age of musicals to cast Sutton Foster and Hugh Jackman; it’s increasingly rare to see a pair of stage stars of this megawattage sing and dance together. Their stardom and undeniable presence seem to have overcome any petty anxieties about the rifts between the performers and their characters — there are places where Foster’s mezzo hits the treble and Jackman gets sour. But director Jerry Zaks solves that problem by bringing them front and center, to stand (or dance) on the lip of the stage and radiate Golden Age glamour. Every “t” signifying trouble has been crossed, every choice is pink and cozy in flannel. The talented, dance-mad young company twirls and leaps with all the vigor of a memorable childhood. A tiny mechanical horse even gallops on stage straight out of our shared deep memory. There’s only one lonely thing that feels modern about River City, and that’s ticket prices. I hate to tell you this, but these people are asking you to part with almost $700 to sit close. Don’t do this, neighbors! It’s flim-flam, it’s bullshit. It’s a scam.

Although I’ve known this show for most of my life, I confess that I never fully understood why Harold Hill is supposed to be such a con man. In Willson’s story, salesman “Professor” Hill tricks entire towns into believing he can turn their boys into a marching band despite knowing nothing about music himself. He orders cornets, trombones, and uniforms from them through the Wells Fargo wagon, but he himself is iron-eared and groping, so he can’t teach them music. Instead, he introduces the Think Method, which requires no practice, and which Marian the Librarian slash the town’s music teacher sees clearly. But – shouldn’t she intervene? Hill actually delivers the items they order; it is not a scam. And Why no one shows these kids how to play an instrument seems like a weird problem for Marian to feel so helpless. I played the clarinet quite badly in CM2. I promise you I didn’t get mad at the man who rented it to me for not showing me how to change the reed. I had a city ​​music teacher for that.

Corn anyway, Hill is a rapscallion, happy to snow townspeople like Mayor Shinn (Jefferson Mays, apoplectic) and his wife, Eulalia (Jayne Houdyshell, stately), with a combination of flattery and distraction. Hill manages to turn some suspicious town dads away by tricking them into becoming a barbershop quartet, at which point the bliss of mixing spot colors overwhelms all of their Midwestern savvy. Hill’s genius with kids sees him immediately playing with Pied Piper, whispering in their ear to throw a hilarious library jamboree (a hit for choreographer Warren Carlyle), and kindest with Winthrop Paroo (Benjamin Pajak ), ten years old, who stutters, the shy little brother of the librarian. Hill is irresistible: everyone turns to follow him – on the Carlyle promenade, on the street, every time he enters a room – but Marian notices that he turns to check on Winthrop, and so she falls in love.

When we say a theater is like a barn, we don’t usually compliment that theater. The massive Winter Garden stage gets weirdly shorter if you sit upstairs, but it looms if you are in the orchestra. The scenographer Santo Loquasto embarks on the skid: the front drop for The music man is the side of a barn – instead of a velvet curtain, a giant red wooden wall keeps the stage hidden before the show. Behind these boards is a midwestern copy of Grant Wood, literally. Huge versions of his paintings like Paul Revere’s Midnight Ride Where Fable by Parson Weems to make this Iowa look airless and still, all the pruned trees round and smooth, the hills as neat as socks rolled up in a drawer.

More has been smoothed out by the way. All of Willson’s backward glances peeked into a few tough corners of his upbringing in Iowa, and where those memories got too offensive, cuts and elisions were made. Scott Wittman and Marc Shaiman delivered a softer, sweeter version of the charm song “Shipoopi,” which was once about girls dating. Shuler Hensley (strangely pissed off and too loud) now shouts “Shipoopi!” Shipoopi! The boy who saw the light. Shipoopi! Shipoopi! Treat a woman right! instead of the slightly more aggressive lyrics of the original. There has been progress, but that progress happened in a song called “Shipoopi”.

As cheesy and predictable as The music man maybe, it will still surprise you. It’s impossible to become jaded by Willson’s opener “Rock Island,” the best curtain-raiser in the business, with its wagon full of vendors, making the train’s chugga-chugga speed along with just their rhythmic chanting. “Cash for the goods, cash for brackets—cash for cottons, cash for durable goods…” they chant as they step out of a siding, a green Iowa gliding past their windows. Willson found a dozen surprising ways to get songs in and out, whether through contrapuntal echoes (the marching “Seventy-Six Trombones” and Marian’s adorable “Goodnight, My Someone” share a melody) or a piano exercise that turns into a full-blown song, or his penchant for the barbershop. In the first hour and a half, the show barely gives Jackman a minute to remove his straw boater before he breaks into another dance and talks about the risks the pool presents to youngsters, or any what Willson shaped into a song for him. The speed of these inventions in the first act is undeniably thrilling – the train is moving at high speed, the governor is off.

In Willson’s more labored second act, there are pockets of emptiness in this production, lengths when finally Carlyle’s beautifully go-big choreography starts to wear thin, the love ballads start to feel a little too much. The shift to more conventional songs doesn’t serve Jackman in particular – as the show progresses, Foster’s voice gets louder and richer, but Jackman’s tone narrows to a pinched, unpleasant sound. He does however, eventually turns to his scene partner. He flickered, and sabotaged, and threw himself around a bookcase set; he tap danced, winked and climbed all over the place in a Wells Fargo wagon. In other words, he spent the first act seducing we. In the second, he finally turns to Marian, and you see the effect of Hugh Jackman’s full spotlight, shining a thousand seats, when focused on a face.

Stars have their own style of celebrity: Jackman’s is always Jackman’s. When his character Harold Hill blurts out something, Jackman shows us that he, Hugh, the magnetic cinema idol, catches it – he shows how hard he has to work to keep up with the amazing dancers around him, or he breaks up the character just a bit (I’ve seen it twice, and it seems like a pattern), a bubbly jerk that dazzles and flatters audiences. Foster, however, has the other sort of star quality: gravity as opposed to brilliance. She is so physically accurate! She lowers one shoulder, that’s enough to button up a scene. She drops it voice? She can turn anything into a joke. Funny, ironic, deep, kind, her Marian Paroo draws our sympathy until the whole show revolves around her. To see if those $700 seats were really that important, just before opening I bought a (more) cheap seat and sat on the balcony. I wish it wasn’t, but parts of the show get lost up there in the thinner air. Foster, however, is a true miracle of musical theater – she only gets bigger and brighter the further you go.

The music man is at the Winter Garden Theatre.