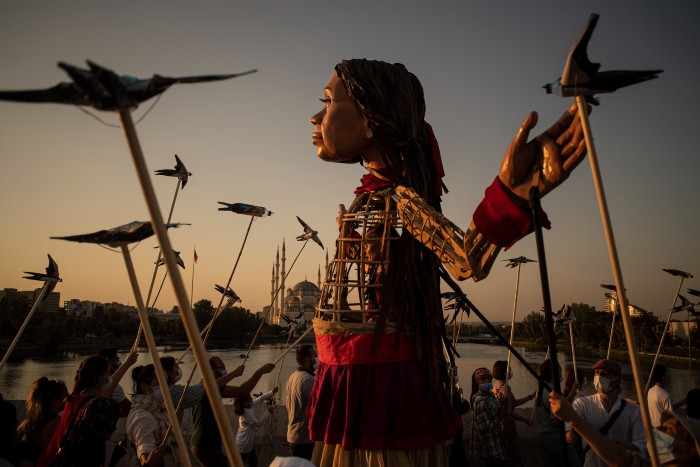 The weeks-long walk, which follows Amal’s 5,000-mile trek through Europe, represents her first visit to the United States. After arriving Sept. 14 at JFK Airport, she will travel through the five boroughs, meeting artists, civic leaders, community groups and young New Yorkers from all walks of life.

Additional details will be available shortly, and updated frequently, at WalkWithAmal.Org and StAnnsWarehouse.Org.

In New York, Amal will be hosted by many of the city’s premier cultural institutions, including the Brooklyn Academy of Music (BAM), Brooklyn Children’s Museum, Classical Theater of Harlem, Lincoln Center, and New Victory Theater; by community groups such as The Mujeres en Movimiento, The Arab-American Family Support Center, and South Bronx Unite; and by public school students in the five boroughs through the New York Department of Education’s theater and arts programs led by Peter Avery.

During her 4-month trip across Europe last summer, Amal was greeted by hundreds of artists and civil society and religious leaders, including His Holiness Pope Francis, as well as legendary actors Jude Law and Mark Rylance, Presidents of the House of Commons and House of Lords (UK), Mayor of Marseille, Secretary General of the Council of Europe and President of the Parliamentary Assembly of the Council of Europe.

Amal’s walk covered a vast territory, including 65 villages, towns and cities, and was seen by nearly one million people live and tens of millions online. Children around the world continue to engage with Amal through awareness materials integrated into school curricula.

Since her trip ended in 2021, Amal has visited Ukraine as well as Ukrainian refugees in Poland, where she embraced and welcomed children and families who had fled the war zone. “Amal’s visit helps Ukraine stay in the spotlight,” said Andriy Sadovyi, Mayor of Lviv. “This attention is another chance to end the war.”

Now an international symbol of human rights, particularly of the plight of refugees, Amal comes to New York in search of her uncle Samir, last seen in his hometown of Aleppo.

Amal is inspired by a character from the immersive play by Joe Murphy and Joe Robertson The jungle, an intense memory of the refugee camp bulldozed in Calais, France. Her momentous visit to New York anchors a three-part production series that St. Ann’s Warehouse champions to connect with America’s historic promise to welcome immigrants. On July 9, 2022, St. Ann’s and Afro Latin Jazz Alliance present Fandango on the Wall, a free concert featuring multi-Grammy winner Arturo O’Farrill and his 18-piece Afro Latin Jazz Orchestra with son jarocho musicians hailing from Veracruz, Mexico, as well as a stellar line-up of guest artists. Inspired by the popular Fandango FronterizoFestivals, which take place simultaneously on both sides of the Tijuana/San Diego border wall, Fandango at the Wall will be performed on the lawn of Brooklyn Bridge Park Pier I with the Statue of Liberty as a backdrop. The gathering will serve as both a poignant reminder and a celebration of the power of music and culture to transcend borders.

Early next year (February 18 to March 19, 2023), St. Ann’s Warehouse and Good Chance Theater will bring The jungle back to St. Ann’s Warehouse, where it made its triumphant and sold-out US premiere in 2018, originally a co-production with the National Theater and the Young Vic.

“Amal is a powerful and moving representation of hope for the millions of refugees in the United States who have left their homes for an unknown future,” said St. Ann’s Warehouse Artistic Director Susan Feldman. “As a home to international artists, St. Ann’s Warehouse understands the immeasurable value of diversity in creative expression. We found a symbol of this mission in Amal.

“Art allows us to imagine different worlds, to enter them and to try, as hard as it may be, to see things differently. When I walked with Amal in Europe, I immediately knew that we had to bring her to the United States and New York to share with us the power of her journey. I want to thank the remarkable and generous group of New York City donors who made Amal’s visit to our city a reality,” said Amal walks in New York EExecutive Producer Karen Brooks Hopkins. “I’m so excited to see Amal explore our city and, in turn, have New Yorkers show her what makes this city so wonderfully unique.”

“My family’s immigration story from Colombia to the United States is full of illegal and legal crossings, forced and unforced journeys,” said Yazmany Arboleda, Amal walks in New York Producer and People’s Artist for the New York Civic Engagement Commission. “I am well aware of the many reasons and ways people leave their homes. I am delighted to shed some light on the story of Amal’s visit. It is an honor to work with the artists, civic and community leaders who make this journey possible. We couldn’t be more excited about Amal’s visit to New York.

“It is more important than ever to restart the conversation about refugees and change the discourse around it,” said The artistic director of The Walk Productions, Amir Nizar Zuabi. “Yes, refugees need food and blankets, but they also need dignity and a voice. Our hope for Amal is that she will showcase the potential of refugees, not just their plight. Amal is 12ft tall because we want her to inspire us to think big and act bigger.

“Amal will unite communities around the world through her magical presence and ability to delight. She will remind us of the power of girls and their right to education. She will ask us to welcome our fellow human beings, to take their hand,” said V, formerly Eve Ensler, Amal Ambassador.

Producer David Lan said, “We have long believed that artists, grassroots communities and civil society leaders must come together to create art that matters in the real world. Amal allows this rapprochement.

Texas town loses its symphony orchestra after failed board talks over…