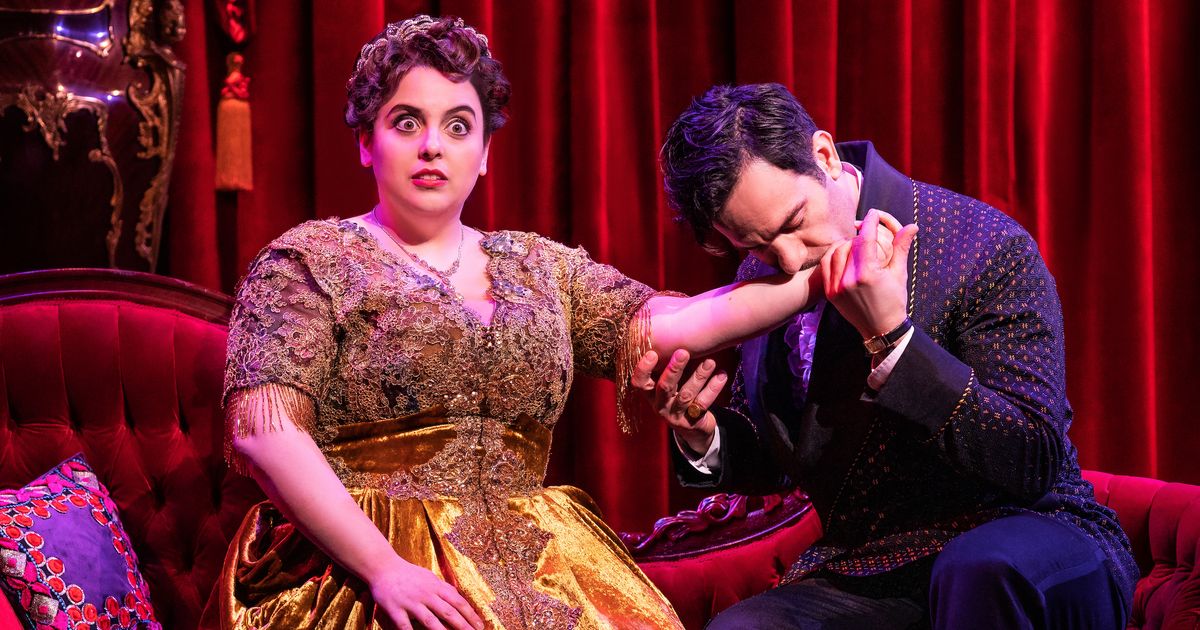 Building a massive show around one person is a gamble. In 1910, impresario Florenz Ziegfeld rolled the dice with comic performer Fanny Brice—he invited her to headline his Follies, a recurring series of shows built around the flawless, interchangeable Ziegfeld girls. That year, and intermittently for decades after, Brice was the axis of his glitter carousel. A brilliant comedian, Brice quickly perfected her hugely popular, giddy, catchy shtick, and then, once Ziegfeld asked her to do the song “My Man” straight back in 1921, she also became a great tragic singer. As a comedian, she had become a galactic star. But Ziegfeld had seen another color in her – and the risk paid off.

In 1964, during the casting of Brice’s biographical musical funny girl, David Merrick made a similar bet on Barbra Streisand. She was already known for her voice and a Tony-nominated ride I can get it for you wholesale, but she had never been a great lady. She was also 21, and no one knew if she could act, not to mention playing an iconic figure like Fanny. Some of the team wanted Anne Bancroft or Carol Burnett, but composer Jule Styne found Streisand’s velvety brass sound had seeped into his music. So the creative team put all their chips in for Barbra.

Now the producers of funny girl revival are making their own bet. Moving Michael Mayer’s production from London, they built their show around 28-year-old Beanie Feldstein as Babs in 1964, a sophomore on Broadway. Just like Ziegfeld did, they hope one kind of talent will translate into another realm, than Feldstein’s precise comedic touch in movies like Library and lady bird will turn into the necessary Big White Way charisma. Every revival is in conversation with the past, but funny girl has a strange place in the pantheon of popular music, and its cast seems particularly loaded. (This is her first Broadway revival.)

Some of Feldstein’s assets make the trip from the movie: She’s winningly fresh; it gives a big “bumble”; she has beautiful eyes big as hubcaps, which roll, twinkle and flirt. In the first act, when Brice is an inexperienced girl making her way into the big time, Feldstein exudes a good mix of unwavering ambition and surprised giddyness when she succeeds. But song after song, Feldstein’s voice lets her down. Piercing and unpleasant as it gets higher than its chest, fading and high-pitched as it descends even a few steps, it’s just not a sound you’d expect to hear on Broadway. Styne and lyricist Bob Merrill wrote some stunners for funny girl, including “People” and “Don’t Rain on my Parade”. That last song falls into Feldstein’s narrow comfort range, and so it blasts it — especially its final note — with foghorn force (if not phrasing). Everything else, however, turns sour.

There’s a palpable feeling that the rest of the production is working hard to catch up. The night I saw him, the opening received enthusiastic applause – as the orchestra hit some recognizable stumps, director Michael Mayer banged the light bulbs around the proscenium, and the crowd (already in love with Beanie? With the music? With memories?) pushed small Cheers. It’s not exactly the musical you remember, though. Harvey Fierstein has created a new version of Isobel Lennart’s book, cutting out much of the dialogue and restructuring the second act to focus on Brice’s tireless beloved, Nick Arnstein (Ramin Karimloo). Fierstein said he wanted to find the funny girl we remember inside the funny girl it actually was. Aside from a few rather confusingly reapplied songs (the newly interpolated “Temporary Arrangement” should convey a lot – and doesn’t), it gets the job done.

When Brice is young and unknown, she assures her mom (Jane Lynch), as well as her friend, choreographer Eddie (tap dancing genius Jared Grimes), that she will be a star. High roller Nick comes backstage one night and clearly agrees. After being called by the divine Ziegfeld (Peter Francis James, doing a lot with a little), Fanny rises, both in her celestial career and in the arms of gambler Nick. People tell him not to trust him; she does it anyway. “I just gotta walk / My heart is a beater,” she yells at us/them/the world, and then their relationship drops down the Act 2 stages.

Regardless of Fierstein’s contributions, this is still a musical written in Brice’s overriding shadow: original producer Ray Stark was his son-in-law. So if you want to know how she actually made her way onto the vaudeville circuit, you’ll have to look elsewhere. The messy truth is a far cry from Lennart’s misty-eyed libretto, which eludes the real Fanny’s first marriage and her many trips to Sing Sing, where she visited her mooching, criminal, married handsome. You feel that harsher reality struggling under the musical’s hagiographic cover, especially in the way Brice’s character flattens and falsifies in the second half.

It is therefore a chance that Karimloo brings a honeyed voice and such ability to his part. His Nick is a sexpot (not to spoil anything, but he pioneered the shirtless Valjean moment in Wretched), a clown (during a very wacky seduction scene, he bounces off the ground onto a chair while remaining perfectly horizontal), a charming addict, a secret boor and, in a superb last moment, a broken man. Jane Lynch floats towards him, like all the noodges in Brooklyn (Toni DiBuono is a particularly good Mrs. Strakosh), and her gentleness with them and with Fanny carries much of the first act. He and Feldstein make their first romance sparkle with humor and warmth – its goofy awkwardness makes him feeling uneasy, which for a smoothie like Nick Arnstein must feel like being hit by a bus. Feldstein seems bewildered by the transition to more adult scenes in Part 2, however, and Karimloo ends up playing them almost as if he were on his own.

funny girl doesn’t want you to think about it too much, so he throws in dance-filled production numbers to distract you. Granted, Mayer and choreographer Ellenore Scott’s Follies don’t feel that glamorous, despite Susan Hilferty’s stunning costumes (women dressed in flowers, silver soldiers,… leggy wedding centerpieces?) and various outbursts of virtuoso tap-dancing choreographed by Ayodele Casel. Perhaps it’s because of a pervasive visual gloom: David Zinn’s set consists of two black spiral staircases and a central play area that occasionally closes off with curved brick walls – it gives the impression that some scenes are played outside of a lighthouse. Big extravaganzas are always welcome, though. Feldstein’s finest moment is a sequence from Follies, in which she adorably undercuts a weighty homage to marriage, and the musical wields its entertainment power. In fact, the numbers work well enough that I still want After comedy in these pieces. It should have been child’s play: just look this movie trailer The follies of Ziegfeld, and try not to laugh at Lucille Ball obvious terror.

But it’s not really a show about shows, it’s a show about a woman. He spends most of his time with her, listens to her, sympathizes with her. When it comes to functioning, Fanny’s songs are all cabotage: they have to explain Brice’s titanic success, they have to move the narrative forward, and they have to do something painful for our hearts. Feldstein cannot sing them. It seems brutal to put a woman in such an exposed position, where an entire Broadway production hinges on notes she can’t sustain. Although, you know, I don’t think it’s inevitable that a strained everyday voice will necessarily ruin the calculation at the heart of the musical. funny girl is preoccupied with stardom itself, and the mechanics of fan love are an inextricable part of the experience. Why been Brice such a huge star? Watching clips of his work, it seems like a mystery; a certain alchemy must have taken place, and we are missing the chemical ingredients in the future. I can imagine a version of funny girl this makes this case – which a strange lady with a strange voice nevertheless had this. But Feldstein doesn’t give us that either. Voice problems you can work around. But presence? This one you must have.

funny girl is at the August Wilson Theater.