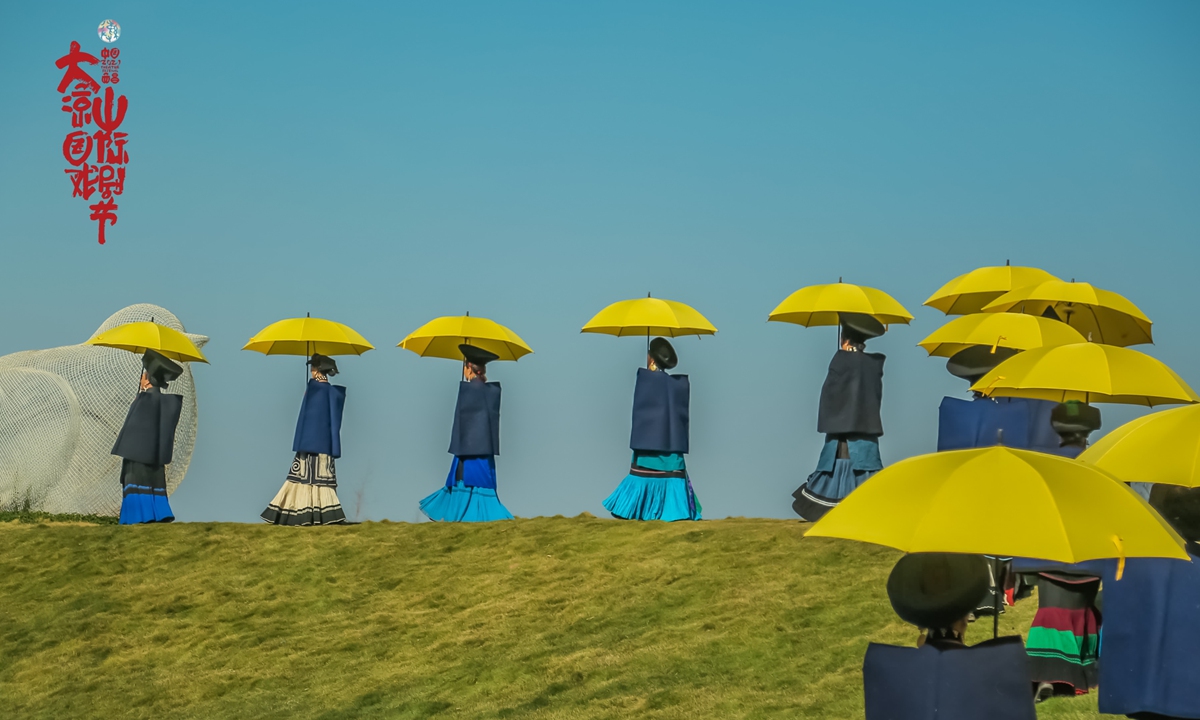 Featuring elements such as garments with accentuated shoulder pads, sheepskin drums, fire worship, and the yueqin (a moon-shaped string instrument), an international theater festival originating from the depths of the mountains of southeastern West China hopes to introduce Chinese ethnic groups to the world.

After years of hurdles created by the pandemic pushed it online, the Daliangshan International Theater Festival returned to an in-person event on November 11. With vigorous mountains as the backdrop for the theater and a steep valley as seats for the audience, the theater festival aims to highlight 14 ethnic groups from southwest China’s Sichuan Province through theatrical performances for Chinese and foreign audiences.

The 2022 festival was unveiled with a recitation of poet Yi Jidimajia’s symphonic poem “A Speech Welcoming the World”.

In the center of a round wooden stage in the valley, a man dressed in traditional Yi clothes and holding a lamp, came out of the door in the shape of a Yi totem which represents life and birth and began to recite the poem. The music of a symphony orchestra combined with the original poem resonated throughout the valley in a true testament to the originality of the ethnic group.

In addition, modern and foreign plays will also be presented during the festival, including a Chinese version of Italian opera Turandot and a production of Hamlet by Xi’an Theater, showing a fusion of ancient and modern art.

“The theater festival here has made the place more lively. I hope the place can become the next international theater just like the Avignon Festival,” said Flora Boillot from the Consulate General of the French Republic in Chengdu, Sichuan.

In 2019, to boost the cultural and creative industry in Daliangshan, the local government invited 25 famous artists from all over the world to found the theater festival.

“In recent years, the great changes that have taken place in Daliangshan have also brought inexhaustible inspiration to artists. From operas that tell the story of Daliangshan’s poverty alleviation to dramas that reflect the ecological environment of origin of the Yi ethnic group, the artists burst into vigorous creativity. Holding a theater festival here gave Daliangshan a chance to see the world, while attracting the attention of the world here,” said a representative of Daliangshan Culture and Tourism Investment Group.

The plays and performances of the festival showcased the central government’s efforts to alleviate poverty. Hear Suoma, a drama inspired by local ‘cliff village’ residents and how a government campaign lifted them out of poverty, is staged at the festival to help more people discover the touching stories that took place in the region.