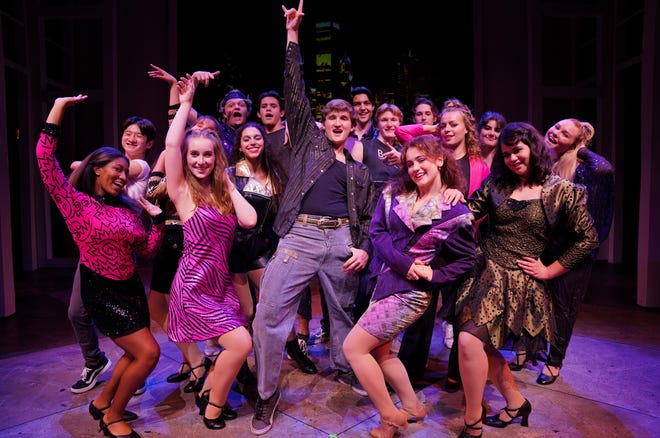 Brevard is enjoying his six degrees from Kevin Bacon as high school theater students roll out their summer shows.

‘Footloose,’ the 1984 film that launched the prolific Mr. Bacon to stardom, is adapted for the Historic stage Cocoa Village Playhouse. The show runs from June 24-26.

The stage production captures the vibrancy of the film, as well as its music, including Deniece Williams’ “Let’s Hear it for the Boy” and Kenny Loggins’ title track.

Chicago boy Ren arrives in the small town of Bomont to find that music and dancing have been banned due to a tragic accident. This is only the beginning, as the city becomes increasingly overprotective and begins to ban books deemed unsuitable for young people.

“You could see a lot of similarities between the world we live in today and the town of Bomont,” said co-director Sally Kalarovich. “It’s important to have musicals like ‘Footloose’ to help us forget the world for a while.”

The cast of 73 students, all part of the Playhouse STARS of Tomorrow Youth program, represents a cross section of schools across the county. Satellite High’s Cooper LaMontagne directs Ren, the teenager determined to show the town the healing power of music. Fellow Scorp Elijah Hillman plays Reverend Moore, the grieving father responsible for the ban.

Broadway Tours:King Center continues the Broadway series with “STOMP”, “On Your Feet!” and ‘Fiddler’

Breaking free with “Footloose” is just the beginning of the offerings for a rich weekend of youth theater. At Henegar Center“Urinetown” is a special Feller Academy production from June 24-26.

Like “Footloose”, “Urinetown” provides a hero who shakes the shackles of government. The story revolves around a water shortage caused by a 20-year drought that led the government to ban private toilets. To answer the call of the wild, citizens must use public amenities regulated by a malevolent monopoly that charges entry.

Each year, Brevard Public Schools, in partnership with the Phoenix Foundation Morning Glow, hosts a Fine Arts Theater Workshop that culminates in two productions in state-of-the-art auditoriums at opposite ends of the county. At Titusville High School, it’s “Sister Act”, while Eau Gallie High School will host “Peter Pan” this year. Performances are at 7 p.m. on Thursday and Friday, June 30 and July 1, and at 2 p.m. on Saturday, July 2.

“Sister Act,” based on the hit 1992 film, features original music by Tony and Oscar winner Alan Menken. The uplifting story of disco diva Deloris Van Cartier’s adventures while in convent custody has been nominated for five Tony Awards.

Based on JM Barrie’s classic tale and featuring an unforgettable score, “Peter Pan” is one of the most beloved and performed family favorites of all time. This high-flying Tony Award-winning musical has been performed around the world and has delighted audiences for 60 years.

Satellite High senior Payton Collins plays the boy who refused to grow up.

“This show was always one of my favorites as a kid, and I’m so excited to be able to fulfill my childhood dream of flying!” says Payton. “It was such a magical experience that I will never forget!”

The music for both productions is provided by a pit orchestra made up of young musicians from Brevard.

“The best part is giving students the opportunity to get to the level of production that most high school students just can’t do,” said Amanda Manis, director of “Peter Pan.” “Working with so many talented students and professionals to put together a musical in just four weeks is the real challenge and joy.

Tickets range from $10 to $12 and can be purchased at BrevardSummer.Seatyourself.biz.

Whether you’re interested in music, theater, festivals, or other local entertainment, FLORIDA TODAY has you covered. Support local journalism by subscribing to Special Offers – USAToday Network.