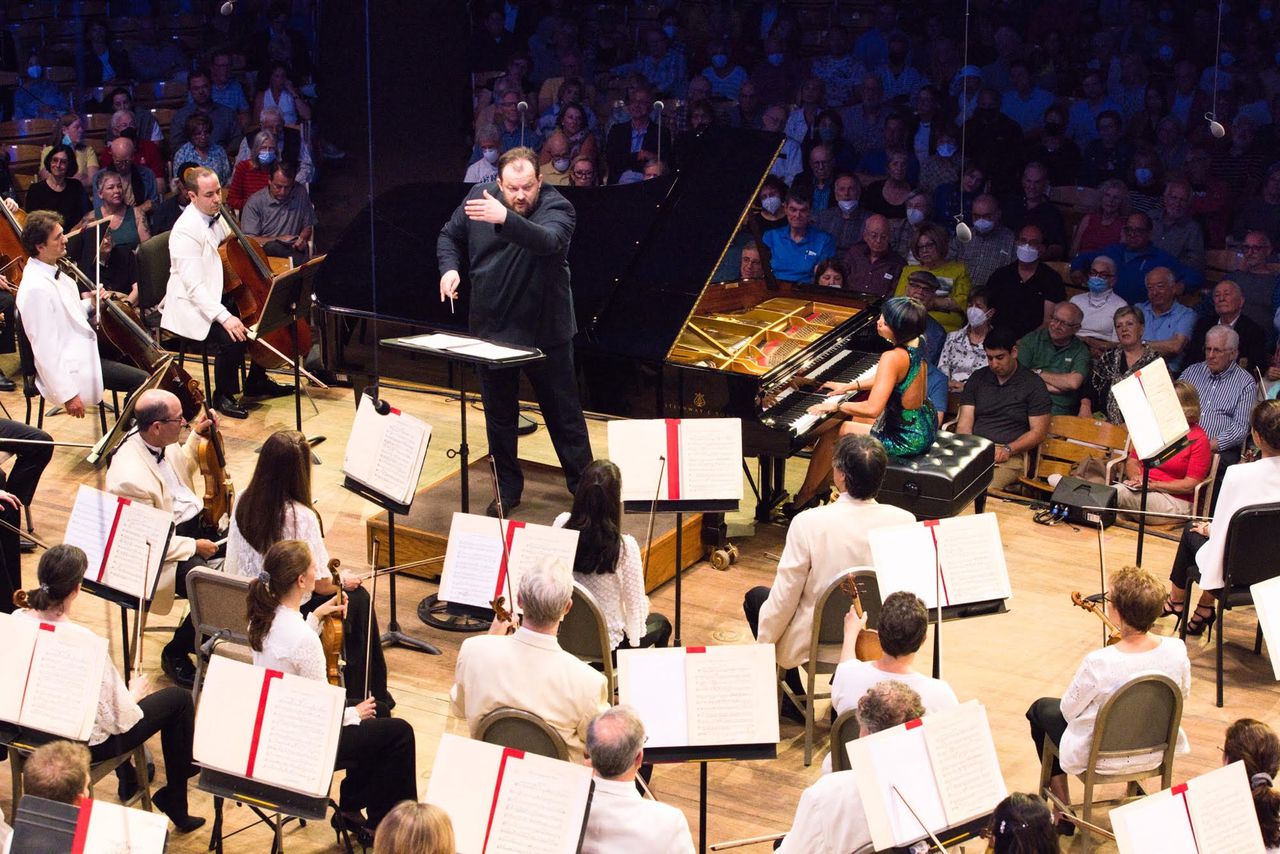 LENOX – Picnics on the grass.

The ringing of an old bell.

Shortly after, music fills the air near the top of a hill overlooking a lake.

No, it’s not a scene from “The Sound Of Music”.

This is Tanglewood, the Boston Symphony Orchestra’s summer home nestled in the hills of the Berkshires in western Massachusetts.

And on Friday night, this magical music venue came to life when the BSO led by Andris Nelsons and joined by pianist Yuja Wang kicked off their summer classical music season at their iconic outdoor theater simply known as The Shed.

You could feel the excitement in the air and see the love for this orchestra in The Shed and on the lawn. Thousands of people turned out for the opening night of the BSO at Tanglewood on Friday.

There’s always something special, something magical at the start of a new season of Tanglewood. This year is no exception.

The program opened appropriately with the “Opening Prayer” by Leonard Bernstein. The late great conductor and composer had a long and storied history with the Boston Symphony Orchestra. As a student, he attended the first summer school for conductors held at Tanglewood in 1940. As a conductor, he regularly led the BSO in performances at Tanglewood and in many other musical venues. Tanglewood was also where Bernstein conducted his last concert in August 1990. He died soon after in October 1990.

Bernstein’s “Opening Prayer” was first performed in 1986. A solemn and moving work that begins on a high note, the music quickly becomes lush and melodic, exactly what you would expect from the same person who created works as acclaimed as the cinematic score for “West Side Story.”

Subsequently, the BSO performed Franz Liszt’s Piano Concerto No. 1 with Wang. The 35-year-old pianist replaced Jean-Yves Thibaudet, who was forced “to withdraw from Tanglewood this weekend due to a death in the family”, according to the BSO website.

Wang has held this position before. In March 2007, she was relatively unknown when she replaced world-renowned pianist Martha Argerich, who was scheduled to perform four concerts in Boston with the BSO. I was at one of these four concerts. At first I was disappointed not to see Argerich. Then I heard Wang and was blown away by his rendition of Tchaikovsky’s Piano Concerto No. 1.

I have seen Wang several times since. And each time, she was a revelation at the piano. Like Argerich, whatever piece Wang plays, music comes to life at his fingertips. It was the same on Friday evening when she performed Liszt’s difficult Piano Concerto No. 1.

Liszt composed the concerto over a 26-year period between 1830 and 1849. Like many great musical works, every note feels inevitable yet natural.

Sparkling music that shimmers like a diamond, Liszt’s concerto demands a tender yet aggressive approach. One moment, the music is soft and sweet. The next moment, the music races in a completely different direction, requiring every ounce of effort and stamina for the pianist to keep up with.

On Friday, Wang made Liszt’s difficult oeuvre child’s play in his skilled hands. Wang played the piece with just the right amount of ferocity and tenderness, zigzagging and zagging from one difficult passage to the next.

Several times throughout the piece, I could see Wang smiling or at times seeming to speak silently to herself as she attacked the piano in a playful yet aggressive manner. Looking at her, you could see how much fun she had playing Liszt’s music, which seemed to flow from her body. And the more difficult the music, the more Wang seemed to enjoy himself on stage.

It’s always been part of Wang’s appeal, that confident sense of playfulness. She’s a captivating performer who loves the spotlight. She wears flamboyant clothes and looks at me on stage. (Friday night was no exception.) She makes dramatic gestures as she performs.

Wang sounds less like a stuffy concert pianist and more like a rock star. Imagine a mix of guitarist Eddie Van Halen frantically ripping through a fast-paced solo and Joan Jett in all her punk rock glory.

But more than anything, Wang is an incredible pianist who can back up all her brilliance with her truly formidable technique. She is the real deal.

Unsurprisingly, Wang received a rousing ovation on Friday night. She then performed the difficult Fantaisie “Carmen” from Bizet’s iconic opera composed and arranged by pianist Vladimir Horowitz. It is a short and spectacular piece. And Wang delivered the solo brilliantly.

In the dance, a young woman dances herself to death as part of a ritual celebrating the start of spring. Vaslav Nijinsky originally created the dance. Several other choreographers – from Martha Graham to Paul Taylor – have since created their own masterpieces to the same music. My favorite dance version of “The Rite of Spring” is Pina Bausch’s raw, primal work performed on a dirt-covered stage.

You can see why choreographers love Stravinsky’s music. It’s rhythmic yet melodic, chaotic yet controlled.

What I particularly loved about the BSO’s Friday night performance of “The Rite of Spring” was how the orchestra made Stravinsky’s music so fresh, so alive – as if the piece had just come from be written a few days ago.

This is largely due to the immense talent of the orchestra’s musicians. Nelsons also deserve credit for consistently bringing out the best in themselves.

And best of all, Friday night was just the beginning.

For the next two months you can hear the BSO in all its glory on the beautiful grounds of Tanglewood.

The Boston Symphony Orchestra and other classical musicians will perform at Tanglewood in Lenox until August 28. For a full schedule or more information, visit the Tanglewood page on the BSO’s website.

Win tickets to travel with the Symphony Orchestra on 96.3 KKLZ!