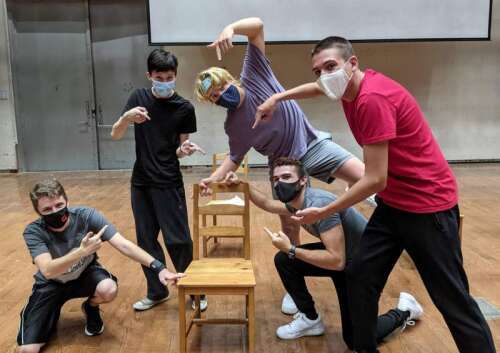 The Theater Department at Northampton Community College kicks off its 2021-2022 season with its first in-person production in 18 months.

â€œWe are counting the days until we are back on stage in front of a live audience,â€ says William Mutimer, head of the NCC’s theater department and director of the musical. The last live theater performance on stage at NCC before the coronavirus pandemic (COVID-19) shutdown was “Little Foxes” in February 2020.

Based on the 1891 German play of the same name by Frank Wedekind, “Spring Awakening” explores the journey from adolescence to adulthood in a sexually repressed society with enlightening and unforgettable intensity and passion.

“Spring Awakening”, winner of eight Tony Awards, including Best Musical, is a fusion of morality, sexuality and rock’n’roll.

Due to the themes of the show, the production is recommended for an adult audience.

The NCC Theater Department continues its partnership with Hampton Winds, the student-run restaurant at Alumni Hall on campus. A â€œSpring Awakeningâ€ themed dinner is available October 21-22 before the show. Reservations: 610-861-4549

The college has announced the remainder of its 2021-22 theater season.

“The Burn” will run from November 18-21. In the play, a high school production of “The Crucible” forces four girls together and the tensions escalate into intimidation.

Lynn Nottage’s Pulitzer Prize winner “Sweat,” will be on display February 17-20. “Sweat” tells the story of a group of friends who spent their lives working together at a factory in Reading, Berks County, when layoffs pitted them against each other.

Carol Churchill’s “Cloud 9” runs March 3-9. The time-shifted comedy is a scathing parody of colonialism and the rigid Victorian attitude towards sex. His humor conveys a message about accepting different people.

The cult musical “Xanadu” will be presented from April 21 to 24. Based on the film starring Olivia Newton-John, Michael Beck and Gene Kelly, “Xanadu” is a quirky roller-skating musical adventure about chasing your dreams despite the limits others place on you. The score for the show was composed by Jeff Lynne and John Farrar of Electric Light Orchestra.

Called an â€œunauthorized parodyâ€ of the 1991 Oscar-winning film, â€œThe Silence of the Lambs,â€ â€œSilence! recreates the horror thriller with song and dance in the 2005 musical created by Jon and Al Kaplan.

Laughing Satire is rated X with several songs whose titles cannot be printed in a family journal. It also features a choir of floppy-eared lambs recounting the action as Buffalo Bill gleefully dances a hoe on the kidnapping of the hapless Catherine Martin.

Fueled by a rabid cult after the songs released online, “Silence!” was extended to a live performance and broke all box office records at the Fringe NYC festival.

William Sanders, artistic director of the Civic Theater of Allentown, directs the show.

Proof of vaccination is required and masks must be worn.

â€œCurtain Risesâ€ is a chronicle about theater, live performances, their actors and the directors and artists who direct them. To request coverage, email: Paul Willistein, Focus Editor, pwillistein@tnonline.com