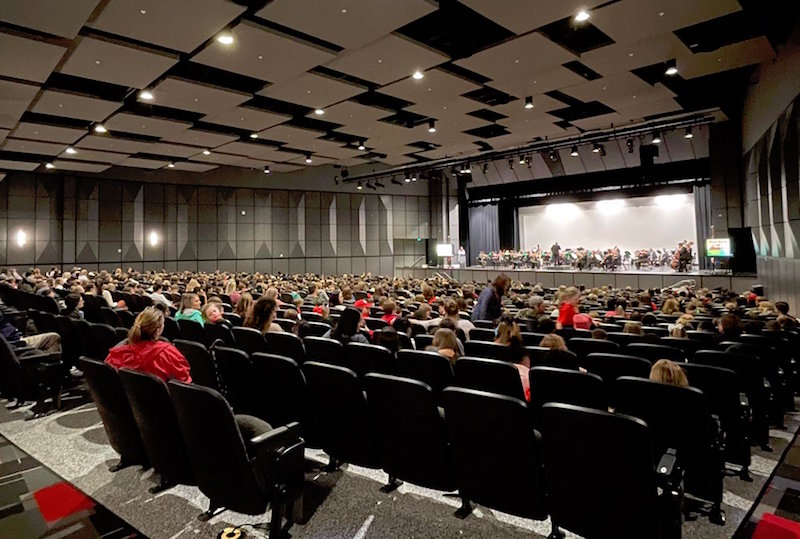 By EMILY REED | Special for the journalist

ALABASTER – About 1,000 students from Alabaster City School recently attended a live school concert by the Alabama Symphony Orchestra for the first time in more than two years.

“The response from students and their teachers has been incredibly positive,” said Chris Confessore, conductor of the Alabama Symphony Orchestra. “It was probably the first field trip for a long time for the students as well. It was a pleasure to play for them. They laughed and cheered throughout the concert. Not only did it educate and entertain the students, but I think their response was a huge boost for all of us on stage.

Confessore said the concert was specifically designed to appeal to elementary school students as a fun introduction to orchestral instruments.

“The students were attentive, responsive and engaged throughout the concert,” Confessore said. “They were a fabulous audience.”

A highlight of the event included a T-Rex dinosaur who came on stage to help lead the orchestra.

“Students responded very positively to the music, illustrations and narrator,” Confessore said. “Having the arts in a young person’s regular curriculum makes them a more curious student and a more thoughtful and sensitive person.”

The event was a partnership between the ACS, the Alabama Symphony Orchestra and the Shelby County Commission.

“We were thrilled to have the opportunity to share this program with such wonderful student audiences,” Confessore said. “Special thanks to their teachers for preparing them so well for the experience. Thanks to all of our friends at Thompson High School for welcoming us back to their auditorium. It’s a beautiful room that we look forward to we produce regularly.