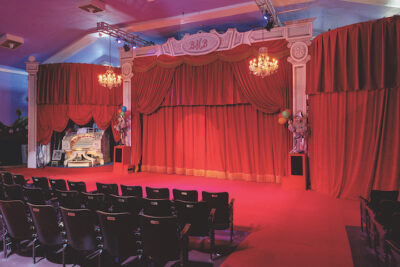 A Legendary Organ Gets a Second Life at the Bob Baker Marionette Theatre: Larchmont Chronicle

LIVE SOUNDS heard from the huge theater organ at the Bob Baker Marionette Theater are enjoyed by children of all ages. Photo: Ian Byers-Gamber

During a recent visit to Bob Baker Puppet Theater (BBMT), Los Angeles’ famed puppet theater, Brookside resident Vivian Gueler took note of something she hadn’t recorded before. An organist was playing “thumping, ancient music” on an elaborately detailed, colossally sized theater organ. Located to the left of center stage, it appeared to be a centuries-old antique.

Gueler inquired and learned that the organ was on permanent loan from the Los Angeles Theater Organ Society (LATOS).

“It’s such a cool story and a little piece of history,” Gueler, who happens to be a board member at BBMT, told me when picking up our kids from school one day.

It just so happens that – around the same time – a copy of the brand new book, “Enchanted Strings” was circulating here at Larchmont Chronicle Office. The book is generally available this month. It details the history of BBMT and its master puppeteer/founder, Bob Baker. Chronicle Editor-in-Chief Suzan Filipek reviewed the book in our January issue.

The organ, however, deserves its own story, and I reached out to BBMT resident organist Ed Torres to get that story. Torres explained to me that this particular organ is a digital replica of a theater organ from the early 1900s, and was donated via LATOS from the private estate of a musician and author named Jack Darr.

I learned that theater organs were built to play during silent film screenings. They were also a cost-saving measure, allowing theaters to replace an entire orchestra with one instrument and one performer.

“They weren’t like church or concert organs,” Torres explained. “They had all kinds of bells, whistles and drums attached. They were extremely versatile – you could play anything. They could play jazz and all the tunes of the day.

This ties in with what Gueler experienced at the BBMT theatre. “The music coming from the organ (played by Torres) was lively and created a friendly atmosphere for all ages,” she shared.

Torres, who has been playing the organ since he was 13, was thrilled to have the chance to come play at BBMT.

“My mother took me to the original downtown theater when I was about six,” he said, “and I always remembered it fondly.”

Torres had spent most of his formative years “hanging out and volunteering” at Old Town Music Hall in El Segundo, eventually becoming chief organist until the pandemic hit.

When he found out BBMT was opening again in September (following its pandemic shutdown), Torres immediately contacted BBMT Executive Director and Chief Puppeteer Alex Evans to let him know he was available. to come and play.

When I spoke with Torres during Christmas week, he was about to play his 100th show at the theater.

“It’s such a specialty, and I’m really happy to introduce an instrument from a bygone era to a new generation of listeners,” Torres said.

Mr. Darr would no doubt be happy too. His estate made it clear that he wanted the organ placed “where people would enjoy it”.

Author Randal Metz will be signing copies of his new book about the Bob Baker Marionette Theater, “Enchanted Strings,” at Chevalier’s Books, 133 N. Larchmont Blvd., at 7 p.m. on Monday, March 7.