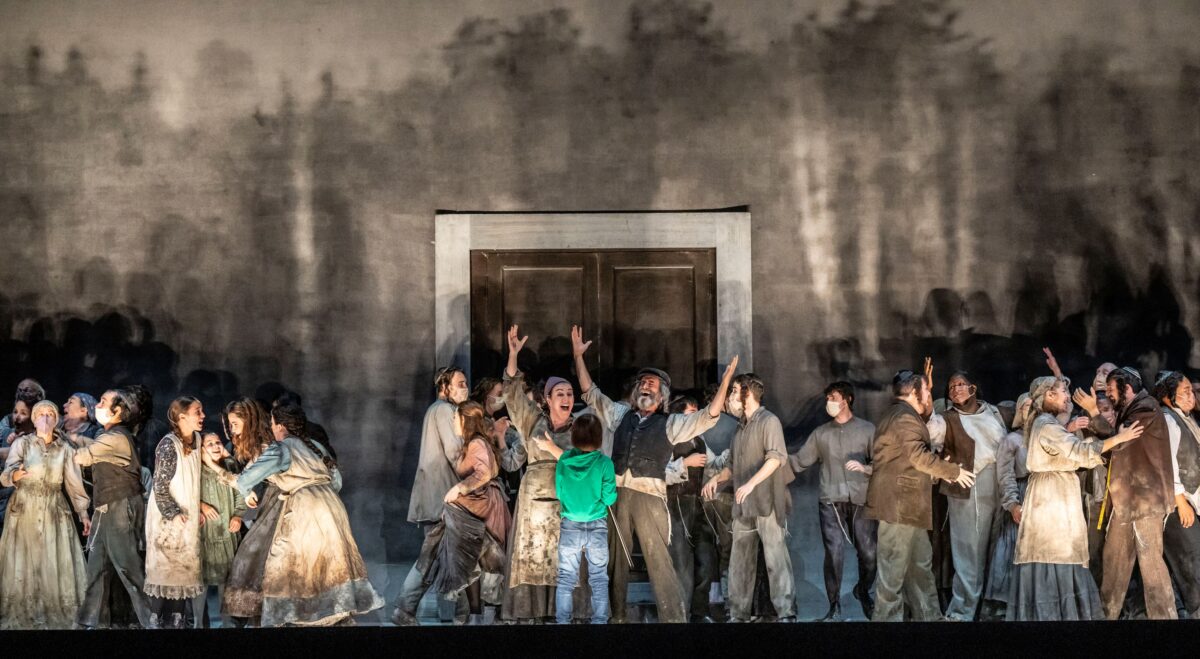 Based on Sholem Aleichem’s stories of Jewish life in the Imperial Russian settlement area around 1905, “Fiddler on the Roof” was initially not well received by investors who were put off by the show because that they thought it would appeal only to Jewish audiences.

Fortunately, Joseph Stein who wrote the book, Sheldon Harnick who wrote the lyrics, and Jerry Bock who wrote the music disagreed, believing “Fiddler” would appeal to everyone. They were right. The story of Tevye, the milkman trying to hold on to his traditions, his religion and his family has struck a chord around the world.

The original 1964 “Fiddler” had an exuberant musical score, but it was performed with such flamboyance that its story was overwhelmed by its brash Broadway style. The presentation of the lyric opera, however, which was first conducted by Barrie Kosky in 2017 at the Komische Oper in Berlin, Germany, focuses much more on the emotional core of the tale and the humanity of its characters.

Violinist on a scooter

The musical begins, not with a fiddler balancing on a rooftop, but with a young boy (Drake Wunderlich), wearing headphones and riding a scooter, rolling across the opera stage. He arrives in front of a cupboard whose doors open to reveal a violin case. He pulls out the violin and beings to play music when figures from inside the closet spill out onto the stage, taking us back to the Jewish world of yesteryear.

Among the differences between this new production and the old one are the scenography and the costumes. This time, instead of a colorful and picturesque village setting, scenographer Rufus Didwiszus placed the Jewish community in soft colors of gray and brown, and furnished it with imposing used cabinets from which figures emerge in the first act, and a frozen landscape of forest and snow for the second act.

In addition, the figures are dressed in drab rags which, designed by Klaus Bruns, give a palpable idea of ​​the poverty condition of their lives.

While the new incarnation of “Fiddler” focuses on the harsh reality of Jewish life in Russia, the musical’s charm, wisdom and enchantment still shine through. Here we have the most glorious music score embellished with terrific performances.

A brave and witty Tevye is portrayed to perfection by Steven Skybell, whose powerful voice and passionate depth bring his character to life on stage. We understand the importance of tradition for him when he explains that it is necessary so that “everyone knows who he is and what God expects of him”. And we appreciate his crushing poverty when he asks God “Would it destroy a great eternal plan if I were a rich man?”

There are so many other fantastic moments and performances in this captivating production. Otto Pichler’s choreography, in which dancers dressed in black storm the stage in Russian style with bottles on their heads while drinking “To Life”. There’s the moment when Tevye tells his wife Golde (Debbie Gravitte) about his dream and asks her “Do You Love Me?” And then there is the scene in which Motel (Drew Redington), the poor tailor, sings of the miracle of God by offering him his wife, Tzeitel (Lauren Marcus). But the moment that will really squeeze your throat is when we hear the haunting melodic accents of “Sunrise, Sunset”.

With Kimberly Grigsby masterfully conducting the formidable Lyric Orchestra and company of 24 actors, 40 in the chorus and 12 dancers, this production is on a scale that an ordinary theater cannot match.

But the triumph of this show isn’t just its epic grandeur. On the contrary, it engages deep empathy because it is the poignant story of the inhabitants of a lost world.

As the show draws to a close and we hear the melodic sadness of “Anatevka”, it is hard to hold back the tears: we watch the miserable multitude driven from their homes and sent to an unknown future in a frightening search for a new life. .

A once-in-a-lifetime production, it’s a show you may never see again. If you only see one show this year, make it this heartfelt “Fiddler on the Roof.”